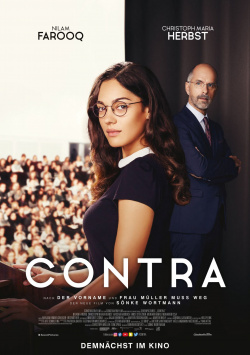 When he hurls xenophobic insults at law student Naima Hamid (Nilam Farooq) for being late in front of the entire lecture hall, Professor Richard Pohl (Christoph Maria Herbst) is threatened with losing his chair at Frankfurt's Goethe University. But university president Alexander Lambrecht (Ernst Stötzner) gives his old friend one last chance: If he, the master of rhetoric, prepares the quick-witted freshman Naima to represent Frankfurt University at a prestigious nationwide debating competition, it could earn him points with the disciplinary committee. Neither Pohl nor Naima is particularly enthusiastic about the idea. But they soon realize that their partnership of convenience is paying off. Naima is becoming more confident and articulate at debating and could benefit greatly from this success - but what happens when she finds out why Pohl is really helping her?

After "The First Name", Sönke Wortmann now delivers another remake of a French comedy with "Contra". The German version of "Die brillante Mademoiselle Neïla" is very well cast with Christoph Maria Herbst and Nilam Farooq and features some delightfully biting dialogue. In addition, the film, which was partly shot in Frankfurt, looks really good. Nevertheless: In places I was downright annoyed by this comedy. That's because Professor Phohl, played by Christoph Maria Herbst, makes an extremely important point relatively early on: he stresses the importance of constructive discussions. Only when we talk to each other and try to understand our counterpart, even if we don't share his or her opinion, can we solve important problems together. That is so right and, given an extremely difficult culture of debate (not only) in Germany, so, so important.

Therefore, in my eyes, it is all the more annoying that the film itself does not adhere to this. Of the debates we are allowed to watch in the film, only the first one shows both points of view. And of course Naima's opponent is a blonde "Biodeutschsche" with braids, who then starts making the worst racist remarks. This is such an embarrassing cliché that it makes you want to vomit. Of course there are problems with right-wing ideas everywhere. But the way this is presented is so incredibly cheap that it's just infuriating. In the other debates only the more and more self-confident Naima gets a chance to speak - and this on topics where it would have been quite important to hear other points of view, which are not presented by some cliché Nazis. Even if some points are correct, Naima's lectures are absolutely one-sided and hardly allow for critical discussions because of an underlying moral superiority. This is precisely how the constructive discussions Pohl invokes as so important at the beginning don't work!

Yes, "Contra" has entertaining moments. But in its viewpoints, the film is extremely one-sided, missing an opportunity to make an important, constructive contribution to our debating culture. Instead, clichés are trotted out and arguments are made that make any reasonable - and in some cases extremely important - discussion impossible. It's well-intentioned and well-acted, but in the end, unfortunately, only worth watching with significant sacrifices!

Cinema trailer for the movie "Contra (Deutschland 2020)"
Loading the player ...