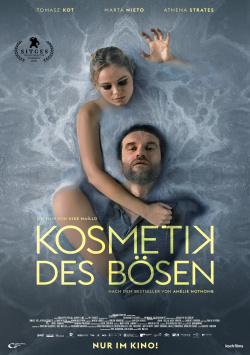 It's a seemingly chance encounter when successful architect Jeremiasz Angust (Tomasz Kot) is asked by a young woman (Athena Strates) after a lecture in Paris to give her a ride in a taxi to the airport so she won't get soaked by the pouring rain. Jeremiasz regrets his helpfulness when he misses his flight as a result. But even more unpleasant is that he can't get rid of the woman who introduces herself to him as Texel Textor. In the airport lounge she tells him disturbing stories from her past, which irritate the architect more and more. For these tales force him to confront again the dark mystery surrounding his wife's disappearance without a trace. The more time he spends with Texel, the more the lines between reality and delusion blur - with bloody consequences...

"Cosmetics of Evil" is the film adaptation of Amélie Nothomb's bestselling novel of the same name. Spanish filmmaker Kiké Maíllo tells the story as a disturbing mystery thriller with engaging imagery that keeps you captivated until the end. It's difficult to go into specific strengths and perhaps problems of the film without giving too much away about the story and its twists and turns. That's why we're going to focus more on the craft aspects here. And there's really nothing to complain about.

Maillo builds the convoluted story very well and skillfully puts the pieces of the puzzle together, all immersed in intriguingly undercool imagery that often acts as a mirror image for the inner life of Jeremiasz Angust. Tomasz Kot and Athena Strates both play very well, with Strates in particular impressing with a mixture of charm and madness. Her acting makes it understandable why Jeremiasz is sometimes fascinated by her, sometimes repelled or annoyed, and then downright terrified. Texel Textor is a very layered, interesting and very mysterious character that Athena Strates really embodies perfectly.

Lovers of the genre will not find the resolution of it all quite as surprising as Kiké Maíllo would have liked. But even for those who aren't surprised at the end, the whole thing remains very suspenseful until the finale, thanks to the extremely atmospherically dense production. A very successful thriller that stands out pleasantly from the mainstream and offers alone visually and acting entertainment at a very high level. Absolutely worth seeing!

Cinema trailer for the movie "Cosmetics of Evil (Spanien/Frankreich/Deutschland 2020)"
Loading the player ...