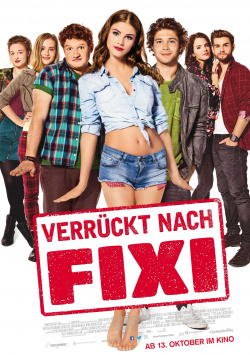 What is the world but unfair: Tom (Jascha Rust) is a really nice guy - and that's exactly why he gets no girl off. And as if that wasn't bad enough, he is humiliated on stage at his graduation party as the last virgin of the grade and awarded a rubber doll. The evening ends in a strip bar with lots of alcohol, rubber doll Fixi at his side and a movie break. When he wakes up in his bed the next morning, he is amazed to see a real dream woman lying next to him: Fixi (Lisa Tomaschewsky) has actually come to life. And the sex bomb doesn't leave Tom's side. Suddenly the shy cartoonist becomes interesting for other girls and cool for guys who have made fun of him so far. He is invited to parties and gets into the hottest clubs in town. And he doesn't stay a virgin for long either. Sounds almost perfect - if it weren't for his best buddy Dodie (Roland Schreglmann), who can't quite understand why Tom doesn't have time for him anymore. As exciting as the time with Fixi and his new friends is, it seems quite like Tom is in danger of losing sight of everything that is actually important to him in life.

Crazy for Fixi is somewhat reminiscent of a cross between the '80s hits Mannequin and L.I.S.A. - The Bright Madness. Director Mike Marzuk obviously tried hard to make the two main characters Tom and Dodie really sympathetic, exuding the charm of the heroes of these and similar 80s comedies. He succeeded very well in some parts. Moreover, with Lisa Tomaschewsky he has found the perfect actress for the sex doll come to life. Thomaschewsky not only radiates an enormous amount of sex appeal, but also spices up her performance with a proverbial wink. With a good portion of self-irony, she playfully embodies all imaginable clichés of a simple-minded sex object and it is quite fun to watch her do so. In addition, the film can score with a good soundtrack and some very nice pictures of Frankfurt.

All these positives are unfortunately offset by a very weak script. The gags lack any form of depth in most moments and are rather on a raunchy, stale level. Even the refreshingly fresh actors can't do much about that. A lot of potential is wasted here in favor of flat jokes, which is a real shame considering the successful moments. Nevertheless, it has to be said that the comedy is clearly aimed at a youthful target audience - and that is served well, with a few exceptions. Crazy for Fixi doesn't want to be a sophisticated head cinema, but simply tries to offer its viewers 94 fun minutes. And the fact that some really silly clichés and flat sledgehammer gags are resorted to in the process, that should bother at least the viewers for whom this film is made little or not at all.

And so, in the end, all that remains to be said is that Crazy for Fixi may not be a particularly good, high-level or even original comedy. But it's solid fun for teenagers with a wonderfully over-the-top Lisa Tomaschewsky and two likeable main actors. And that's enough for a decent: Worth seeing!

Cinema trailer for the movie "Crazy for Fixi (Deutschland 2016)"
Loading the player ...