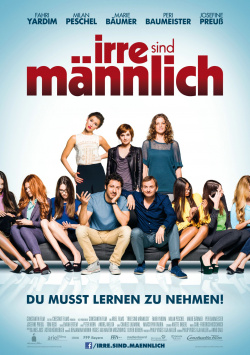 Actually, Daniel (Fahri Yardim) just wants to show his girlfriend Mia (Josefine Preuß) how much he likes being with her. But she perceives this only as constriction and annoying jealousy. When Daniel dares to spend a little time at Mia's side at a party, she has had enough and ends the relationship. But Daniel doesn't give up that easily. To win Mia back, he wants to work on his relationship skills and gets involved in group therapy. He seeks support from his best friend Thomas (Milan Peschel). Not a good idea, as it soon turns out. Because when womanizer Thomas discovers that such group therapies are perfect for picking up vulnerable women, he persuades Daniel to sleep his way through a wide variety of self-help groups as a therapy tourist. With fake names and made-up problems they move from one group therapy to the next and from one bed to the other. But of course this kind of thing can't go well for long. Not only does the therapy-addicted lawyer Sylvie (Marie Bäumer) find out about them. To make matters worse, Daniel falls in love with the actress Bernadette (Peri Baumeister) during a weekend workshop. This can only end in complete emotional chaos.

It was about time that Fahri Yardim got a real leading role. Whether in Tatort alongside Til Schweiger, in Medicus or in the Wotan Wilke Möhring comedy Mann tut was Mann kann - Yardim always had to play second fiddle, but often left a more lasting impression than the actual leading actors. In Irre sind männlich the Hamburg-born German-Turk is allowed to set the tone and outshine his co-stars such as Milan Peschel, Josephine Preuß, Tom Beck or - in a mini-appearance - Matthias Schweighöfer. Directed by the very versatile Anno Saul (Wo ist Fred?, Die Tür), Yardim proves that he definitely has the talent to carry a comedy like this.

However, one would have wished him a better script for this leading role. The story, seemingly cribbed directly from The Wedding Crashers in some places, is devoid of any surprises and dispenses with any form of restraint. This sledgehammer approach works very well for some of the gags, especially when the whole thing leans more towards slapstick. Already in Where's Fred, Saul has shown that he can do this form of humor very well. At other moments, however, a little more subtlety would have been in order, both in the acting of the actors and in the serving of the punchlines. Thus, however, the characters threaten to degenerate into one-dimensional caricatures and the humor to flat gags.

That the actors, especially Milan Peschel, Marie Bäumer and Herbert Knaup, embody their characters with an infectious fun in the exaggeration, compensates for some of the weaknesses again. Still, it can never really match the entertainment value of other recent German hit comedies. Irre sind männlich has a lot of potential, but it is too rarely fully played out. And as much as Fahri Yardim and his co-stars are worth seeing, the scenes in which the film can elicit more than just a tired smile from the viewer are simply too few and far between to be able to pronounce a convincing "worth seeing" here. But if you like light German comedy fare in the style of Kein Sex ist auch keine Lösung or Mann tut was Mann kann, this film can be recommended with a clear conscience!

Cinema trailer for the movie "Lunatics are male (Deutschland 2014)"
Loading the player ...