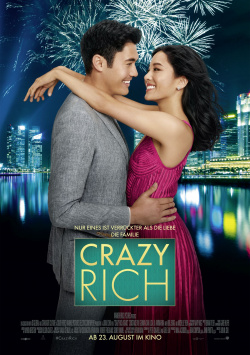 Rachel Chu (Constance Wu) leads a happy life in New York: She loves this city, her job as a university professor and of course she also loves her boyfriend Nick Young (Henry Golding), with whom she has been involved for over a year. For Nick, now is the right time to finally introduce the love of his life to his family. The wedding of his best friend in Singapore offers the perfect opportunity. What Rachel doesn't suspect is that Nick's family is rich. Damn rich. And his mother Eleanor Young (Michelle Yeoh) in particular doesn't like the idea of her son bringing a simple girl into her exquisite family. And so this trip threatens to become a real horror trip for Rachel, despite pure luxury.

Crazy Rich is the film adaptation of the first volume of the Crazy Rich Asiens trilogy by Kevin Kwan, which has been enormously successful in the USA. The books have not yet been published in Germany, which may explain why the film adaptation is getting a relatively small start in this country, while in the US it is causing full cinemas. The film is so successful there that a sequel was already announced in the opening week. However, the success is not only due to the popularity of the book or the fact that for the first time in over twenty years a Hollywood film was directed with a purely Asian cast. Also crucial was the fact that director Jon M. Chu made a really good movie and one of the finest romantic comedies in recent memory.

Admittedly, the story is very simple. It's basically just a variation on the Cinderella theme being told here. But there are a few special features. For instance, there are the characters. Rachel is an enjoyably strong, independent woman who, while impressed by the wealth of Nick's family, doesn't let it affect her actions. You actually buy that she only loves Nick for himself and would give up everything without hesitation to have a life together with the man of her dreams. And with him, too, it's more than believable that he would even break with his family for love. Whether it has to come so far, of course, is not revealed here.

Also side characters like Rachel's best friend (wonderfully weird: Awkwafina), Nick's successful cousin Astrid (Gemma Chan) or Oliver, the rainbow-coloured sheep of the family (Nico Santos) are drawn in such a charming, funny and interesting way that you just love watching them. In addition to the characters, the dialogue is also a standout. These are sometimes extremely biting, enigmatic and simply funny - especially in the English original. In addition, there are wonderful pictures, in which you could revel endlessly (yes, sometimes you get a little envious of the Crazy Rich Asians) and a great soundtrack. All around, then, a successful affair.

In the end, though, what really counts is that the film not only has a lot of wit and entertainment value, but also a whole, whole lot of heart and charm. You can laugh heartily, enjoy nasty intrigues reminiscent of the best times of Denver Clan and Co. or even sob heartily once in a while because it's just sooooo beautiful what's going on. Thus Crazy Rich is one of the most positive surprises of the cinema year and definitely worth seeing for all those who love great and humorous heartbreak cinema! Part 2 can't come fast enough!