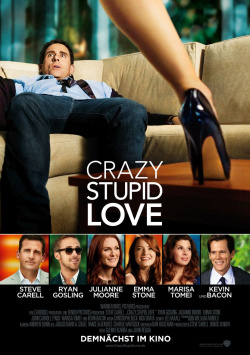 Love is not only beautiful. Sometimes it's also crazy or just plain stupid. Crazy, Stupid, Love. Glenn Ficarra and John Requa have already illuminated the different facets of the most beautiful feeling in the world in a very special way in their last film I love you, Phillip Morris. And in their latest directorial effort, love is also at the center of the amusing action, although this comedy proves to be much more straightforward and suitable for the masses - which is not necessarily to be understood as a disadvantage.

Although routine has crept into his life, Cal Weaver (Steve Carell) has actually had no reason to complain so far. He has a decent job, a nice house, married his high school sweetheart and is a happy father. But then Cal's ideal world abruptly falls apart when he learns that Emily (Julianne Moore) has cheated on him and wants a divorce. Instead of fighting, Cal loses himself in deepest self-pity. That only changes when he meets pick-up guy Jacob (Ryan Gosling), who takes the cuckolded husband under his wing to teach him the secrets of how to perfectly seduce women. But just as Cal is celebrating his first successes, Jacob meets the self-assured Hannah (Emma Stone), who throws the womanizer's emotional balance into disarray. But this is only the beginning of numerous romantic entanglements, the outcome of which threatens not to be happy for all involved.

Crazy, Stupid, Love is a nice romantic comedy, which serves numerous clichés, especially towards the end, but at the same time goes against the expectations of the audience in some scenes. However, the comedy derives its high entertainment value primarily from the interplay between the completely different characters Cal and Jacob. While Steve Carell proves to be the perfect casting for the unassuming but very lovable family man, Ryan Gosling seems almost born for the role of the swashbuckling Jacob. His seduction skills and attempts to initiate Cal into them are just too hilarious. At the same time, the moments between the womanizer and Hannah when Jacob's shtick stops working and he shows a much more genuine side are just wonderful. The chemistry between Gosling and the once again great Emma Stone (Easy to Have) is spot on and you just wish this couple to get together - which might be difficult not only because of Jacob's past.

In principle, the film consists of several storylines that are only brought together at the end. There's Cal and Emily's crisis, Jacob and Hannah's relationship, and the budding friendship between the two disparate men, as well as the unrequited love of Cal's thirteen-year-old son Robbie, who has a crush on his 17-year-old babysitter Jessica, who in turn only has eyes for his abandoned father. But Emily's affair with her colleague David Lindhagen (wonderfully sleazy: Kevin Bacon) also takes up a not insignificant portion of the story. Certainly, due to the different storylines the film sometimes seems a bit overloaded, especially since some moments seem rather unnecessary.

But in the end the chaos pays off in a sugary sweet finale. However, some viewers might be bothered by the final scenes, as they do degenerate too much into kitsch and the elaborately established problems seem to vanish into thin air all at once. Still, the directors have included some wonderful little moments here as well, such as the ending of the story involving Robbie and Jessica, which actually make it impossible not to leave the cinema with a satisfied grin on your face.

Crazy, Stupid, Love thankfully relies on its good actors and witty dialogue and doesn't need fecal humor to entertain. If you like American romantic comedies of the more low-key variety, you'll definitely be entertained here. Like love, movies are sometimes beautiful, sometimes crazy, and sometimes just plain stupid. Fortunately, only the former is true of Crazy, Stupid, Love. Worth Seeing