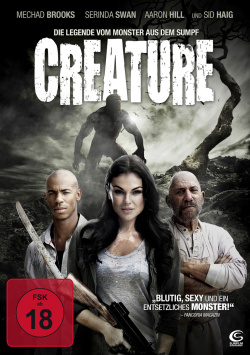 Creature - The Legend of the Monster from the Swamp - DVD

Content: Friends Emily (Serinda Swan) and Niles (Mehcad Brooks), Oscar (Dillon Casey) and Karen (Lauren Schneider), and their brother Randy (Aaron Hill) and Beth (Amanda Fuller) are looking forward to their weekend vacation in New Orleans. The road trip there is supposed to get them in the mood for the party to come. But as is so often the case, leaving the set route turns out not to be a very good idea for these young people. In the middle of nowhere, near the run-down village of Fort Collins, they learn about the legend of Grimley Boutine (Daniel Bernhardt), who long ago became the cruel monster Lockjaw, who still wreaks havoc in the swamps around Fort Collins. The friends have the grandiose idea of going to see Grimley's old house, which has now become something of a tourist attraction. But they have no idea that they are walking into a bloody trap...

At the U.S. box office, Creature actually managed to set a record: the horror flick had the worst opening weekend for a film that opened with more than 1,500 prints. Just $300,000 was brought in by the $3 million work. Now that may not sound very good. But the directorial debut of Fred Andrews, who previously worked as a production designer on such series as CSI Miami and Without a Trace, is far better than this failure in its brief theatrical guest appearance would suggest.

The film opens with an almost obligatory scene for the horror genre: an attractive young lady disrobes in front of the audience to take an impromptu dip in a mysterious-looking body of water. The inclined genre fan already suspects: she won't reach dry shore again in one piece. After this introduction follows an exposition that leads us to expect a typical teen slasher in the style of Wrong Turn. A group of young people who once again take the wrong exit and meet a group of runaway hillbillies in no man's land. But Andrews expertly plays with the audience's expectations here, only to steer them in a slightly different direction.

For what follows is classic old-school monster horror, pleasing with classic make-up effects and some hefty splatter interludes. Sure, Lockjaw does look a little trashy. On the other hand, the whole thing has a certain charm that makes the film pleasantly stand out from many contemporary genre works. Admittedly, this doesn't change much about the fact that the characters are drawn very one-dimensional on the whole and the dialogues aren't exactly the best example for cleverness. On the other hand, there are always some scenes that are extremely entertaining in their own way, just because they serve so uninhibitedly stale clichés. Who looks at the whole thing with a little wink, will therefore certainly have a lot of fun with this murderous swamp trip.

Creature is qualitatively perhaps not a really good film, but entertaining pleasure offers the monster from the swamp all the time. If you like horror ingredients like blood, naked skin, crazy hillbillies and rubber monsters and don't take it too seriously, you can safely grab this home movie premiere. Recommended!

Picture + Sound: The DVD's picture is clean and has decent overall sharpness. Only in the darker scenes does the detail presentation show some weaknesses. The colour scheme is atmospheric and the contrasts are also decently mixed. The audio action takes place primarily in the frontal area in many scenes, but every now and then a few coherent surround effects provide the right atmosphere. Good!

Extras: In addition to the trailer for the film and other program tips from the provider, the DVD has three short documentaries about the creation of the monster (about 6 min.), the shooting (about 8 min.), and about the filmmakers (about 7 min.) to offer. It's an entertaining glimpse into the production, which becomes especially amusing when an actress gushes about how much depth Lockjaw actor Daniel Bernhardt would have given the monster behind the rubber mask.

Conclusion: Creature is a fairly entertaining monster horror that pleases with handcrafted effects and plays with stale genre clichés in a pleasant way. Unfortunately, the film takes itself a little too seriously towards the end, and doesn't exactly excel in terms of dialogue and acting either. Still, this thing from the swamp has a decent fun factor that makes the nearly 90 minute running time go by without much length. The DVD presents the film in decent picture and sound quality and also has a few nice extras to offer. All in all, fans of slightly trashy monster horror get enough here to rate this disc as recommendable