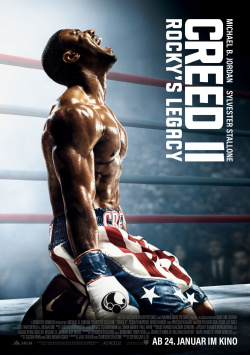 Adonis Creed (Michael B. Jordan) has done it: with the help of his trainer and mentor Rocky Balboa (Sylvester Stallone), the young boxer has become heavyweight champion of the world. And everything is going well in his personal life, too, when his girlfriend Bianca (Tessa Thompson) accepts his marriage proposal. So Adonis looks forward to a rosy future - until he is challenged to a very special fight that reopens old wounds. Viktor Drago (Florian Munteanu) wants to step into the ring against him. He is the son of Ivan Drago (Dolph Lundgren), the man who took the life of Adonis' father. The boxer sees no other option but to accept the fight. But Rocky advises him against it and is not ready to face this dark chapter of his career again. But Adonis throws all warnings to the wind and accepts the challenge - which could quickly prove to be a fatal mistake.

When Ryan Coogler brought Creed to theaters in 2015, it was a truly positive surprise. Coogler perfectly managed to continue the Rocky saga, which was actually completely exhausted, and reinvent it at the same time by shifting the focus from Rocky Balboa to Adonis Creed, the son of his one-time adversary and then best friend Apollo Creed. The film was a perfect blend of nostalgia and new beginnings, scoring points with a good story and a convincing Michael B. Jordan. But the biggest surprise was probably Sylvester Stallone's great performance, which earned the action star a Golden Globe as well as an Oscar nomination.

No question that after this commercial and artistic success, a sequel was needed. Coogler handed the director`s chair over to Steven Caple Jr, who had the difficult task of at least matching its successful predecessor with Creed II: Rocky`s Legacy. Because to outdo it qualitatively was actually impossible from the start. All in all, the new story about Adonis and Bianca is once again successfully linked to the past of the franchise. To that end, a direct reference was made to Rocky IV, in which Apollo Creed died in the ring. Dolph Lundgren once again takes on the role of the ice-cold fighting machine, with Ivan Drago - just like Rocky Balboa - meanwhile taking on the role of trainer.

And this is where the film plays to its great strength. It skillfully avoids simply replaying the events of yesteryear by the new generation. Rather, the script, which Stallone once again co-wrote, makes Ivan Drago a very interesting and enjoyably complex character. He lost everything by losing to Rocky, and he just can't shake that shame. What that has done to him and to his son is one of the most interesting aspects of this sequel. It's also surprising that the creators managed to have another character from Rocky IV reappear, which you really wouldn't have expected.

But otherwise, the whole thing is just another repetition of the all-too-familiar concept. Very well executed, but without the positive surprise effect Creed could benefit from. At least Stallone has taken the opportunity to bring the story of Rocky Balboa to a rounded and beautiful end now, once and for all, and give the series, should it continue, another fresh start. If you liked Part 1 and the early Rocky movies, you shouldn`t miss Creed II: Rocky`s Legacy. Absolutely worth seeing - with a small point deduction for the dubbed voice of Stallone, who is not voiced by his regular Thomas Danneberg this time.