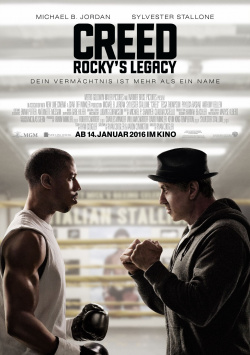 Much of Adonis Johnson`s (Michael B. Jordan) childhood was spent in institutions. It was there that he learned to fight his way through. He never met his father, boxing legend Apollo Creed, who died in a fight before Adonis was even born. But even though he has no intention of following in his father's footsteps, he can't deny that boxing is in his blood And at some point, he just accepts that it seems to be his destiny to step into the ring himself. Without further ado, he quits his job and moves to Philadelphia to be trained by the man who was first an opponent and later his father's best friend: Rocky Balboa (Sylvester Stallone). He has long since hung up his boxing gloves and really only wants to spend his retirement in his small restaurant. But after initial hesitation, he agrees to train Adonis. And while the young Creed prepares for his first big fight, Rocky is suddenly confronted with a completely different opponent, whom he is not prepared to fight.

Actually, Sylvester Stallone had sent the character of the boxer Rocky Balboa ten years ago after the last, very successful part of the series in the well-deserved retirement. Stallone was perfectly happy with the way this iconic character had said goodbye to his fans, that he was convinced there didn't need to be another Rocky story. But then along came Ryan Coogler, who had made a splash with the drama Next Stop: Fruitvale Station. He desperately wanted to tell the story of Apollo Creed's son while hitting the tone of especially the first Rocky movie. And he could only do that with Stallone's help. It was probably the passion that Coogler showed for the project, the story that contains all the classic Rocky themes and not least the persistence of the young filmmaker, which finally persuaded Stallone to slip into this role once again - the first time without having been directly involved in the script.

The result is called Creed - Rocky`s Legacy and is a perfect blend of nostalgia and new beginnings. The film truly does not tell a new story, but does so with a great deal of warmth, heart and authenticity. It also gives Stallone the opportunity to show all his critics once again that he really does have acting talent - which was immediately rewarded with a Golden Globe. Even though Rocky Balboa is really only a supporting character here and the film belongs to Michael B. Jordan, who delivers a more than convincing performance, it is the very coherent, at times pleasantly humorous interplay between Jordan and Stallone that makes this passing of the torch so worth watching. A stirring father-son dynamic develops between the still unruly, hot-headed Adonis and the ageing Rocky, giving the film a very special emotional layer.

In addition, of course, the boxing matches and training take centre stage. Again, Coogler delivers a coherent blend of classic elements and modern filmmaking. There is, of course, the traditional training montage, set to a rousing soundtrack that captures the spirit of Bill Conti's music very well. Coogler's production doesn't pander to current trends, but it still doesn't feel stale. During the fights themselves, he perfectly manages to put the viewer right in the middle of the action, giving these scenes a tremendous intensity.

Creed - Rocky`s Legacy, however, is not only a gripping boxing drama, a beautiful love story and a worthy tribute to the characters Stallone created over 40 years ago. The film is also a declaration of love for Philadelphia and its people. This is evident in a visual language that is pleasantly different from the slick images one is usually used to seeing in Hollywood. Here Coogler remains true to the style that already provided the very special atmosphere in Next Stop: Fruitvale Station. Actors, story, locations, camera work, music and the bow to the beginnings of the series - all this adds up to an impressive and coherent overall picture. If you liked the first Rocky movies and basically appreciate entertainment cinema that puts a lot of emphasis on character development and a well-written story, you shouldn't miss this one. Absolutely worth seeing!!!