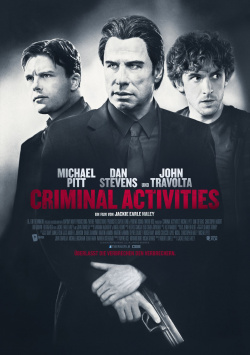 It sounds like the perfect plan: with the help of an insider tip, four former classmates Zach (Michael Pitt), Warren (Christopher Abbott), Bryce (Rob Brown) and Noah (Dan Stevens) want to make a lot of money on the stock market. All they need is a starting capital of $200,000. Since the friends are one hundred percent convinced of the success of this investment, they can borrow the money from a notorious gangster boss (John Travolta). Too bad that the tip turns out to be hot air and gangster Eddie wants his money back as soon as possible - with interest, of course. To pay off their debt, Eddie offers the boys a deal: If they kidnap the nephew of a rival mob boss and hold him for a few hours, they'd be even. The four have no choice but to agree to this dangerous deal, unaware that this is just the beginning of a steadily spiraling spiral of violence from which even they seem unable to escape alive.

For his directorial debut, Criminal Activities, actor Jackie Earle Hailey (Watchmen) clearly drew inspiration from Quentin Tarantino and from Bryan Singer's The Usual Suspects. The one-time child star, who melted girls' hearts in 1970's The Bears Are Out and its sequels, is clearly trying to copy Tarantino's coolness in dialogue and Singer's cleverness in twists. However, he only partially succeeds. In some scenes the exchanges are indeed extremely amusing and the dramaturgical hooks are quite surprising. But on the other hand, there are also moments that seem to be too much effort to actually work.

The spasmodic attempt to be cool and original come hell or high water simply gets in the way of a really coherent narrative flow now and then. If Hailey would have broken away a little bit from its too spasmodic ingratiation to its big idols, Criminal Activities would have had the potential to play in the same league as them. As it is, the film just always feels like a copy - and that's just a shame. Because taken on its own, this sometimes quite bloody crime comedy is really extremely entertaining. The actors, especially Dan Stevens (Downton Abbey) and a wonderfully overacting John Travolta, are obviously enjoying themselves. And at some points, there's even something like a modicum of suspense.

The ending may not be quite the surprise Hailey would have liked for connoisseurs of the genre, and especially of the aforementioned role models. Still, this final twist works very well and also makes up for some of the weaker plot elements. Thus, Criminal Activities isn't a new cult movie overall, but it's still fun to watch. If you can overlook the somewhat plodding beginning and a few bumpy spots on the way to the successful finale, you'll get an absolutely solid, entertaining and partly bloody funny crime comedy for your money. Worth seeing