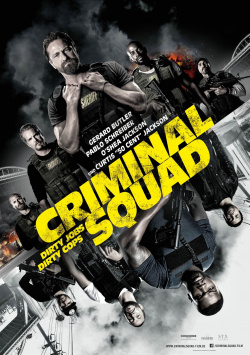 Los Angeles holds a sad record when it comes to the number of bank and armored car robberies. In addition to many small-time crooks, there are also some well-organized gangs that keep slipping through the police's fingers. One of them is the team around ex-con Ray Merrimen (Pablo Schreiber), who has already made a lot of money with perfectly planned robberies. But when a robbery on an armored truck ends in a bloodbath, the tough cop Nick O`Brian (Gerard Butler) and his unit come on their trail. A merciless game of cat and mouse begins, but that doesn`t stop the gangsters from planning their biggest score yet: robbing the Federal Reserve Bank in downtown L.A. .

Admittedly, my expectations for Criminal Squad weren't particularly high. So-called heist movies, which are about perfectly planned robberies - usually with the gangsters as (anti-)heroes - are a dime a dozen, and not just since Ocean`s trilogy. And cop thrillers with rough-around-the-edges heroes aren't exactly a rarity either, and are often more in the realm of B-movies. But already after a few minutes it seemed like this flick could offer some really good entertainment. And this impression was more than confirmed in the course of a little more than two hours. Sure, screenwriter Christian Gudegast (London has Fallen), who makes his directorial debut here, doesn't reinvent the genre. There are also a number of much-loved clichés employed here - not to mention that logic seems to take a complete leave of itself in some scenes.

This, however, does little to change the fact that the thriller offers damn good entertainment, some successful moments of suspense and decent action sequences. On a dramaturgical level, the film can benefit from the fact that it lets the viewer participate equally in the work of the investigators, as well as in the preparations of the gangsters, while repeatedly blurring the lines between good and evil - because Nick and his squad are cops, but move with their methods only a hair's breadth on the border of legality. Here the film also benefits from the fact that Gerard Butler obviously had a lot of fun not to play the hero with the clean slate, but one who sometimes gets his hands dirty to achieve what is right in his eyes.

Aside from a few minor lengths in the first third and a few logic holes in the finale, Gudegast has delivered an absolutely fine genre entry with Criminal Squad, which doesn't necessarily offer a lot of intellectual depth, but still has a pleasing complexity to it. And most importantly, he's made a film that really entertains its target audience, both in quieter moments and in the superbly crafted action sequences. For this there is a very clear: Absolutely worth seeing!