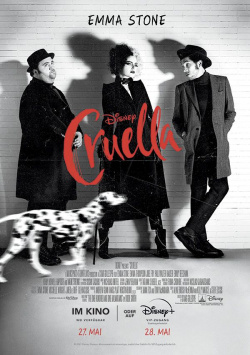 Since childhood, Estella (Emma Stone) has made her way as a con artist in London. Together with her cronies (Joel Fry) and (Paul Walter Hauser), Estella has worked her way up to become a true professional grifter. But her dream is quite different: she wants to revolutionize the fashion world. In fact, her friends scam her into a job at the hottest department store in town: for Estella, the ticket to the fashion empire of Baroness von Hellmann (Emma Thompson). The fashion legend takes Estella under her wing. In the process, her brusque manner and a few events ensure that Estella increasingly brings her dark side out into the open - and so it's not long before she becomes Cruella de Vil. She's not only a serious competitor for the Baroness, but also a sinister avenging angel who has a score to settle with the fashion designer....

"Cruella" follows "Malificent" as another Disney work telling the backstory of a classic villain. Let's be honest: in both cases, we didn't really need this. Cruella de Vil was just so delightfully evil in "101 Dalmatians" that explaining why she's so bad can just lessen that impact. However, the result is not quite as disappointing as it was with "Malificent" (and especially with its completely unnecessary second part). This is due as much to the great set and costumes as it is to the two lead actresses.

Emma Stone plays her role with absolute abandon. While she can also be convincing in the quieter, dramatic scenes, she's really good whenever she gets to be downright evil as Cruella. Emma Thompson is in no way inferior to her. She is so unbelievably nasty that it is a great pleasure - at least for the audience in the (home) cinema. The duel of the two fashion divas is great acting. Nevertheless, the fact that the Baroness literally walks over dead bodies for her success gives Cruella's story a tragic side, which - despite some bad deeds - somehow wins her the audience's sympathy in the end. And the Cruella de Vil we know from the animated classic really doesn't deserve that.

The really effortful attempt to build a bridge to "101 Dalmatians" at the end then also leaves a very bland aftertaste. Why, I can't say without massively spoiling. Only this much perhaps. It changes the whole starting situation of the story - in a way that I personally don't like at all. So the bottom line is that "Cruella" looks great and has a lot of entertainment value in many scenes. Still, the film is completely unnecessary as a prequel to "101 Dalmatians", as why Cruella de Vil is so evil is completely irrelevant to its story. For those who simply enjoy seeing Emma Stone and Emma Thompson at their best, the film can still be recommended. And so, despite justified criticism at the end, there is definitely still a: worth seeing!