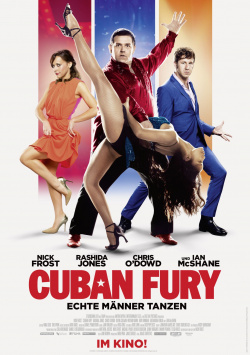 Bruce (Nick Frost) leads a low-key life as a lowly clerk. Career advancement is as far away as the seemingly unattainable happiness in love. Once Bruce, who is not only because of his corpulence always the target of jokes of his arrogant colleague Drew (Chris O`Dowd), was full of fire. As a boy, his heart burned for salsa dancing. But after a traumatic experience, Bruce hung up his dancing shoes and now prefers to spend his time golfing or at the pub. But when American Julia (Rashida Jones) becomes his new boss, the discovery that this dream girl is passionate about salsa dancing rekindles his old fire. To impress her, he wants to get back to his old class. Only one person can help him: his old mentor Ron (Ian McShane). But he still resents the fact that Bruce stopped dancing from one day to the next. And so Bruce, in love, must first prove to Ron that he really means it this time - and in the process he loses valuable time, which Drew uses to make a pass at Julia.

Nick Frost is known primarily as Simon Pegg`s partner in the films of the so-called Cornetto trilogy (Shaun of the Dead, Hot Fuzz, The World`s End). Those expecting similar black humor, anarchic wit and pace from his solo performance in Cuban Fury will be bitterly disappointed. For even though Frost plays the lovable loser here, as he often does, he strikes a very different note than he does alongside his buddy Simon Pegg. Cuban Fury is aimed more at viewers who love classic British romantic comedies.

Frost's biggest challenge here was surely to make it believable for viewers why a woman like Julia could fall in love with an unassuming, not exactly attractive guy like him. He was not only helped by charm, dry humor and dancing talent, but also by Chris O`Dowd alias office creep Drew. It is amusing that Frost and O`Dowd virtually swap character traits from the comedy Radio Rock Revolution, in which they also appeared together in front of the camera. While Frost was the cocky ladykiller there, who had no qualms about getting into bed with his friends' wives, while Chris O'Dowd played the lovable, shy outsider, the actor known from the cult comedy series The IT Crowd is allowed to be really uninhibitedly disgusting here. This in turn benefits Frost, who gets all the audience sympathy, especially in the scenes where Bruce is once again bullied by Drew.

Although the humour takes on a more absurd edge in some scenes, such as a delightful underground car park dance duel, Cuban Fury is overall a fairly conventional comedy that is happy to use a few clichés, especially when it comes to the supporting characters. This is especially true of Bejan (Kayvan Novak), Bruce's new salsa partner. But even if characters like Bejan seem to be completely overdrawn, this is done in such an endearing way that one is only slightly bothered by it. Despite several stereotypes and a very predictable plot, this somewhat different dance film is just a lot of fun, extremely funny in some scenes, in other moments just charming and heartwarming.

Admittedly, Cuban Fury is not the big hit. But the film still manages to give the viewer almost 100 minutes of pure good humor. And even if it succeeds in a very harmless way, that's more than enough to justify a visit to the cinema. So if you don't expect a comedy in the style of the Frost/Pegg movies and just want to see some nice entertainment for the laughing muscles and the heart, this charming work can be highly recommended. For the smiles on your face and the twitching in your dancing legs that this film evokes, then give it a: Absolutely worth seeing!