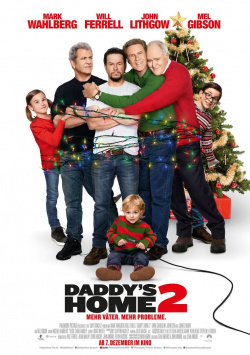 Christmastime, You Lovely Time. After settling their differences, Dusty (Mark Wahlberg) and Brad (Will Ferrell), the stepfather of Dusty`s children, are the prime example of harmonious coexistence in patchwork families. Dates are split up, as are holidays. This year is supposed to be especially nice, because for the first time the whole family is supposed to celebrate together. Brad's father Don (John Lithgow) and Dusty's father Kurt (Mel Gibson) are also part of the party. Macho Kurt, however, does not like the fact that his son has apparently developed into a softie. He does everything in his power to bring discord into the patchwork world - and for that any means is fine with him.

After the Bad Moms were allowed to celebrate a chaotic Christmas in their second film, now the Daddys follow suit. Daddy`s Home 2 is a typical Hollywood family comedy with brute humour. The first part, which grossed almost 250 million dollars worldwide, was not a prime example of originality and subtle humour. But as is often the case with sequels, part 2 has to step it up a notch. Not only the story, but also the gags lack any element of surprise. While the predecessor played with stereotypes in an amusing way, this positive element is almost completely missing here.

Sure, for a few laughs the turbulent goings-on is still good, but over long stretches the wooden hammer gags and the largely unsympathetic characters only tug at the nerves of the audience. After about 90 minutes of extremely flat jokes on the viewer, comes on the home stretch, of course, the morality-tinged kitsch club to use. At its core, the scene in a multiplex lobby is quite amusing. But given the preceding humour, the message of wholesome family and peace on earth is kind of cheesy.

Daddy`s Home 2 is not much worse than the first part. If you liked that one, you will be able to laugh heartily at least in parts. But objectively, the film is a sad testament to the lack of imagination and courage of major movie studios, especially in the area of family entertainment. Sure, for an entertaining cinema afternoon the movie might be the right thing, but it would be nice if the audience could be trusted to laugh about more than men getting shot in the soft parts, children handling firearms or father and son constantly kissing each other on the mouth. Therefore, only with a lot of pre-Christmas benevolence, there is just one: Worth seeing!