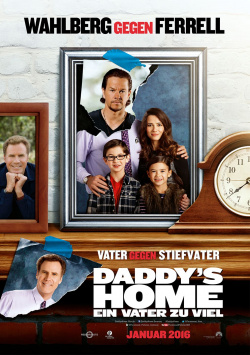 Daddy`s Home - One Father Too Many

Finally Brad (Will Ferrell) has found what he always wanted: with Sarah (Linda Cardellini) he has a great wife by his side and their two children slowly start to accept their stiff father. The perfect family idyll, in other words. But that changes when Sarah's ex Dusty (Mark Wahlberg) shows up. He not only wants to spend more time with his children. He also wants to have his Sarah back. And so he starts a merciless duel, in which Brad seems to have no chance. After all, what's a slightly clumsy radio worker to do against a muscle-bound free spirit like Dusty? But even if the cool competitor seems to have all the trumps in his hand, Brad does not want to let his luck be taken away so easily and lashes out for an unexpected counter-attack - with chaotic consequences.

Daddy`s Home - One Father Too Many is admittedly not high-minded cinema fare. Here originality and intellect simply take a break. And that is just as well. Because without the self-imposed shackles of cinematic pretension, the highly silly cockfight between Mark Wahlberg and Will Ferrell can really unfold. When the two nevertheless very dissimilar men try to outdo each other in their declarations of love while putting the kids to bed, when it's suddenly Christmas in the summer or Brad tries to impress his stiff kids on their father's motorcycle, it's really funny not only because of the complete mismatch of the actors but also because of the unrestrainedly silly staging.

Naturally, not every gag is spot on. Some scenes overshoot the mark or just aren't funny. But for such viewers who just like the comedies of Will Ferrell, the successful moments clearly outweigh the others. This is also due to the fact that the two main actors take themselves for a ride. While Ferrell does this with regularity and is always convincing, but not surprising, Wahlberg's play with his image as a somewhat simple sex symbol is extremely amusing in some scenes.

Similar to their first collaboration in the buddy-comedy The Other Cops, Daddy's Home - A Father Too Much lives on the joke that comes from the complete diversity of the characters, who pursue the same goal. If you like the easy kind of brute humour and just want to laugh heartily about really stupid - but also funny - slapstick gags, this is the right movie for you. And therefore, despite all the obvious weaknesses, there is a clear: worth seeing