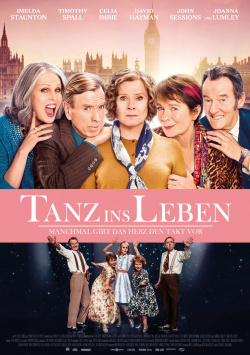 Sandra Abbott (Imelda Staunton) has achieved in her life exactly what she always dreamed of. With her husband Mike (John Sessions), a newly retired police officer of the highest honors, she enjoys wealth and now a title of nobility. But her days as Lady Sandra are soon over when she discovers that Mike has been cheating on her with her best friend for some time. Faced with the shards of her life, Sandra unceremoniously moves in with her sister Bif (Celia Imrie), who leads such a completely different life. With her unconventional attitude towards life, Bif tries to cheer up her snobby sister, but at first she doesn't succeed. It is only when she is able to persuade Sandra to accompany her to her dance group that the starting signal for a change in Sandra's life could be given - provided she manages to finally put an end to her old life.

Dance into Life is a nice comedy about how even at an advanced age, it can still pay off to muster the courage to make drastic changes. Director Richard Loncraine has assembled a great ensemble for this charming story about dancing retirees, led by Imelda Staunton, who comes across as very likable here, quite unlike her performances in the Harry Potter films - at least once she sheds her snobby demeanor. The good cast and some genuinely nice moments ensure that Tanz ins Leben certainly takes its target audience across the floor.

However, it has to be said that the film doesn't take any risks. Dramaturgically, it follows a clear pattern that has been tried many times before. Everything is extremely predictable and thus, unfortunately, completely lacking in surprises. Unfortunately, this also leads to the fact that the characters seem more like classic genre stereotypes and have nothing genuine about them. Granted, this point of criticism would come across much heavier in films of other subjects than in a light-hearted comedy. But still, one would have wished for a bit more courage to be independent here and there, to be offered even more than something you've already seen countless times like this.

But to just switch off, feel good and leave the cinema with a slight smile on your face, Tanz ins Leben is the right film after all. Who wants exactly that and does not expect more, gets for his money a large portion of joie de vivre offered. And for all justified criticism, there is then also a clear: worth seeing!

Cinema trailer for the movie "Dance Into Life (Großbritannien 2017)"
Loading the player ...