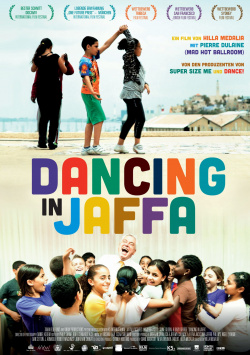 With his Dancing Classrooms, internationally renowned dancer Pierre Dulaine has created a project through which over 400,000 children have so far learned not only how to dance, but also social awareness, self-confidence and the elimination of prejudice. A success on which one could actually rest. But Dulaine still has a very big dream. He wants to return to his native city of Jaffa to teach Israeli-Palestinian and Israeli-Jewish children how to dance together. In doing so, he wants to help them overcome the hatred and mistrust that they are virtually born with in this city. An undertaking that is considered impossible by many in advance. But in fact, some schools are willing to participate in the project. But can a single man really break down deep-rooted hatred and prejudice in just ten weeks with the help of ballroom dancing? Can such a project bring about real change?

In the documentary Dancing in Jaffa, director Hilla Medalia follows the charismatic dancer on this very personal and challenging journey. Dulaine, whose life has already been made into a film in the feature Dance! starring Antonio Banderas, approaches a project that is actually doomed from the start with an infectious enthusiasm. Even in a conversation with a taxi driver at the beginning of his journey, Dulaine realizes how deep the hatred runs among Jaffa's populations. But this does not discourage him. For him, it is clear that change is possible and, above all, necessary, even in such an environment.

In his first encounters with the children, he initially experiences what he would probably experience anywhere in the world when boys and girls are asked to dance together for the first time. There's laughter, you hear the occasional ewww or I don't want to dance with that one. It's all very normal. But when he makes it clear to them that he wants Israeli-Palestinian and Israeli-Jewish children to dance together, he is initially confronted with reactions that are frightening and also discouraging. How he turns this initial headwind into something really unique in just ten weeks, how he manages to build bridges between children and adults with his very special way, is just quite wonderful to watch.

The fact that Hilla Medalia has managed to deal with the really very serious social problems in Jaffa in an entertaining way and without being too overbearingly concerned is what makes this documentary so recommendable, even if some scenes do drag a bit in the middle section. But whenever you get the feeling that the film could have done with a little tighter staging, Pierre Dulaine immediately makes up for this minor shortcoming with his engaging and extremely likeable manner. It's thanks to him that in a film that deals with the conflict between Israelis and Palestinians, you can also laugh heartily and leave the cinema with a smile on your face and hope in your heart. And exactly for this there is then also a more than deserved: Absolutely worth seeing!

Cinema trailer for the movie "Dancing in Jaffa (USA 2013)"
Loading the player ...