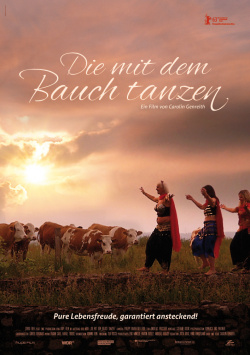 Dancing with your belly

Young filmmaker Carolin Genreith is on the verge of a nervous breakdown. In a little over 600 days she will turn 30, and since already nothing is as she imagined it when she was 16, she doesn't even want to imagine what it will be like when she is 40, 50 or even 60. Carolin doesn't want to get older, doesn't want her body to become a victim of gravity, and doesn't want to spend her days doing nothing but Nordic walking and other retired activities. A visit to her mother in the Eifel region at home should ease the excitement a little. And the Berliner-by-choice is amazed when she finds her mother Biggi completely relaxed and happy. And that could also be - how embarrassing - because Biggi has discovered a new hobby for herself with other older ladies: belly dancing. But even though the filmmaker first feels a good deal of embarrassment, she soon realizes that belly dancing gives her mother and her friends Marita and Birgit a joie de vivre that makes getting older seem not as terrible as Carolin thought it would be.

Dancing with Your Belly is a very entertaining documentary that works brilliantly not only as a portrait of three women, but also as the director's examination of her once-hated homeland and of her own generation. She portrays herself with a certain self-irony as a very neurotic representative of a generation that is never satisfied with itself and wants everything, but for that very reason doesn't actually get what really makes it happy. And now, in her home country of all places, which she has always considered extremely stuffy and provincial, she meets a group of women who don't care about sagging breasts, wrinkles and flabby bellies, who have found their place in life and are simply happy. Carolin Genreith wants to find out how this can be by accompanying her mother and her two friends with her camera.

The results are very open and unaffected snapshots, in which Biggi tells, for example, that for her the most unhappy time in life was actually her 20s, in which she was constantly searching. Only now, after she separated from her husband after 25 years of marriage, found a new love and discovered belly dancing for herself, does she feel she has arrived and is truly happy. Marita, the founder of the belly dance group, reveals her secret for a happy marriage, which she has had with her husband for 37 years now, and introduces Carolin to her 91-year-old mother. Anyone who knows her would no longer be afraid of old age - an assertion that even the filmmaker cannot completely escape. And Birgit finally reveals how she finds stability in her life through painting, a life that has been severely shaken by a stroke of fate. The openness with which the women talk about aging, the self-confidence they show in belly dancing and the general joy of life they radiate makes the film absolutely worth watching from the beginning to its wonderful finale in Paris. Sometimes spiced with very true-to-life humor that reminds a bit of Sung Hyung Cho's Full Metal Village, sometimes very moving, but charming throughout, this documentary presents itself in a way that not only amateur belly dancers will enjoy. Absolutely worth seeing