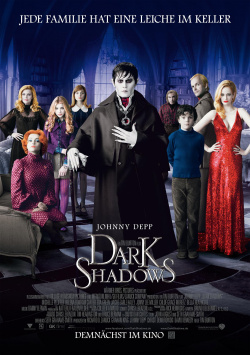 The TV series Dark Shadows, which ran for a whole 1225 episodes between 1966 and 1971, is not only one of the most successful daily soaps, but was also absolutely trend-setting with its mixture of exaggerated drama and fantastic elements. The influence of the series, which is almost completely unknown in this country, on entertainment culture can be described as enormous. The popularity of the series, especially among the younger audience, increased dramatically when the character of the vampire Barnabas Collins was introduced a year after the start, who quickly became the main character of the series. A very big fan of this character was also the then very young Johnny Depp, who has since always dreamed of being able to play this role one day. Directed by his regular director Tim Burton, that dream has now come true.

In the big screen adaptation of the series, Depp takes on the role of Barnabas Collins, who, after breaking the heart of the witch Angelique (Eva Green), is first turned into a vampire by her, only to be buried alive. For nearly two hundred years, Barnabas remains trapped in his earthy tomb until he is accidentally freed in 1972. After quenching his first thirst for blood, he finds that the world has changed drastically: Cars, electricity, emancipation, television, all of which are completely foreign to the former lord of Colinwood Manor. But with the help of his descendants, he wants to learn to find his way in the world that is new to him. At the same time he wants to make sure that the Collins name shines again in old glory. Too bad his descendants are a completely dysfunctional bunch who have completely run down the family estate. And if that wasn't bad enough, Barnabas soon runs into an old acquaintance and a nanny who painfully reminds him of his great love, driven to her death by Angelique...

Johny Depp and Tim Burton's eighth collaboration may not be one of their best. But after the colorful family film Alice in Wonderland, which met especially with fans of the director only little backlove, it goes here again clearly quirkier and also a little darker to the point. Especially at the beginning you feel pleasantly reminded of Burton's Sleepy Hollow. The movie can't keep this quality until the end and some of the good ideas are just too overdone to really work. And yet one thing is true for Dark Shadows without question: the movie is a lot of fun!

Whether it is an advantage not to know the TV series, is up to the viewer. The fact is that viewers who have never heard of Barnabas Collins can still fully enjoy the film. True, there are a few small allusions, such as brief guest appearances by series Barnabas Jonathan Frid, who died shortly before the film's release, and other cast members of the cult series that only true Dark Shadows fans will be able to recognize. But overall, the film is designed for the uninformed viewer and the story, which is really very simply plotted, can be followed without any prior knowledge.

That Johnny Depp once again had great fun playing a very quirky character is immediately apparent when Barnabas is released from his grave in the 1970s. Especially when his reactions to what is new to him are primarily in his facial expressions, Depp's great talent for offbeat roles of this kind is evident. So while it's fair to say that it's primarily Johnny Depp who carries this film, the rest of the ensemble delivers quite wonderful performances as well. Whether it's Helena Bonham Carter as a hard-drinking psychiatrist, Eva Green as a love-struck witch, Michelle Pfeiffer as frustrated matriarch Elizabeth Collins, Jacke Earle Haley (Watchmen) as a slightly goofy caretaker, or Trainspotting star Jonny Lee Miller with a mean haircut and even meaner chubby as a smarmy Roger Collins, they all ensure that the creepy comedy still has plenty of good laughs in store, even in the slightly weaker second half.

With a great set that falls somewhere between gritty gothic and colorful '70s chique, some nice running gags (Colinwood Manor's agile cleaning lady, for instance, is just too delicious), and a tuneful soundtrack, Dark Shadows is enjoyable cinema in just about every way. Tim Burton may not be back to his best yet, but this different vampire movie is a big step in the right direction. And therefore also applies: absolutely worth seeing!