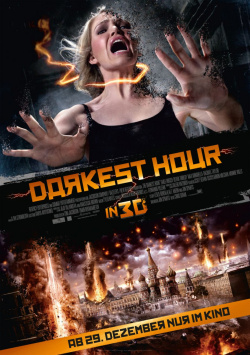 The trip to Moscow was supposed to be the culmination of everything they've done so far for aspiring Internet entrepreneurs Sean (Emile Hirsch) and Ben (Max Minghella), securing them a lucrative deal worth millions. But the deal is snatched from under their noses at the last second by their Swedish competitor Skylar (Joel Kinnaman). But the two guys don't want to let their failure spoil their trip and treat themselves to a party before the return flight, where they meet the two Americans Natalie (Olivia Thrilby) and Anne (Rachael Taylor). Just as the evening seems to be taking a pleasant turn after all, strange glowing apparitions become visible over the city. What begins as a fascinating spectacle quickly turns out to be a deadly alien invasion from which Sean, Ben and the girls are able to save themselves at the last second along with Skylar, of all people. After several days in their safe house, the five venture back outside - and find a world where there seems to be no chance of survival for humanity...

With his feature debut Right at your door, Chris Gorak delivered a minimalist thriller with a harrowing ending that managed to leave a strong impression despite its rather quiet production. For the sequel Darkest Hour Gorak could not only blow a bigger budget, with the Russian success director Timur Bekmambetov (Wanted), he also has a prominent producer at his side, who understands it first-class, fantasy action visually first-class implementation.

The filming locations in Moscow provide with their very own character for a coherent dark atmosphere, which gives the already promising story the right keynote. With a squad of good actors like Emile Hirsch (Into the Wild), Joel Kinnaman (Easy Money) or Olivia Thirlby (Juno) the alien thriller also has a lot of acting potential. But despite all these good signs, Darkest Hour is unfortunately not much more than a surprise-poor average product. Neither the effects, nor the dialogues nor the dramaturgy itself can really captivate the viewer - even the neat, albeit completely unnecessary 3D visuals don't help much.

Once and again scenes reveal the potential of the story, which is then diluted by the disappointing alien design, pathos-filled dialogues or frighteningly tension-poor staged action sequences. Only then, when Gorak lets some irony shine through here and there and tries to boost the fun factor, the action goes in the right direction after all.

The ending finally leaves room open for possible sequels, which, however, will probably only be really longed for by the fewest viewers. Too bad actually, because so obviously as here good potential has not been shot for a long time apparently without reason. If you're looking for simple alien invasion entertainment with great shots of Moscow, decent actors and a handful of successful moments, Darkest Hour can definitely be recommended to you. But if you also expect real suspense, a touch of originality and lush 3D effects, you will surely be bitterly disappointed!