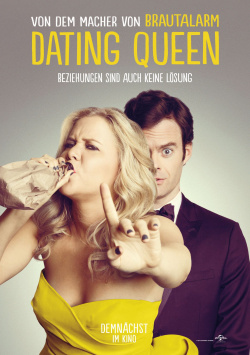 Since childhood, Amy (Amy Schumer) has always been drilled that monogamy is unrealistic. Not wanting to repeat her parents' mistakes or even end up in a stuffy marriage like her sister Kim (Brie Larson), Amy has taken this life lesson from her father (Colin Quinn) as her motto. For the reporter of a men's magazine there is only her job, parties and one-night stands. Anything that has anything to do with romance, Amy avoids like the plague. Until she meets sports doctor Aaron Conners (Bill Hader). He's so different from the men Amy usually dates and talking and spending time with him is actually really fun! Could it be that monogamy is worth striving for after all and that something has been missing in Amy's life so far? And after all these years of living and partying free and unattached, is she even capable of the well-behaved relationship life?

Dating Queen is the culmination of Amy Schumer's success story so far, as she has gone from unknown stand up comedian to absolute comedy queen in the US over the past few years. Her comedy specials are just as successful as her critically acclaimed series Inside Amy Schumer. At first glance, the New Yorker seems somehow well-behaved and cute. But her humour is really nasty, biting and completely politically incorrect. And yet: you can't really be mad at her, even when she says really violent or even raunchy things (the best example is her song about the Fudge Machine). This makes her the perfect partner for director Judd Apatow, who likes to be a bit crude in his films, but always has his heart in the right place. Schumer has written the role in their joint film to suit herself. In the amusing story she also deals with some very personal things like her father's MS disease. Admittedly, not exactly the right stuff for comedies. But the mixture of crude RomCom and drama works pleasingly well, which is certainly one of the reasons for the respectable success of the film in the U.S.

Although some gags are already very clearly set below the belt, the really embarrassing jokes are kept within pleasant limits. Instead, the script convinces with wonderful dialogues, which also provide in the good German dubbing for some wonderful laughs. Also the wonderfully atypical cast with NBA superstar LeBron James as Downton Abbey loving sidekick for the romantic hero or arthouse icon Tilda Swinton as a frilly editor-in-chief provide good humor as well as the wonderful guest appearance of Daniel Harry Potter Radcliffe, who is seen as a dogwalker in a movie-within-a-movie. Great!

The chemistry between Schumer and her co-star Bill Hader, known from the legendary comedy show Saturday Night Live, is perfect and you can understand why the relationship-shy Amy throws her anti-monogamy principles overboard for the smart doctor at first. It's just fun to watch the two of them flirting and making love. And even though the movie doesn't offer many surprises in terms of this romance, even worn-out clichés are executed in a very charming and original way. However, there is one small point deduction: As is the rule with Judd Apatow, Dating Queen is a little too long. There are some scenes where the scissors could have been used for the sake of a more coherent pace. But that's just not Apatow's forte. He loves to give his actors room to improvise, which then leads to some dialogue scenes that slow down the overall pace without adding anything really important to the story.

Never the less: even if the comedy didn't need the running time of over two hours, it's never really boring. There's a good laugh at least every two minutes, sometimes more restrained, other times really heavy. Overall, Judd Apatow has undoubtedly delivered one of his best films to date: it's crude without being overloaded with too many vulgar extraneous moments, it has a lot of heart without ever getting maudlin, and it also hides some great asides on bigotry and political correctness in a really nice love story. A biting chick flick that you can laugh heartily at even if you're a man. Absolutely worth seeing