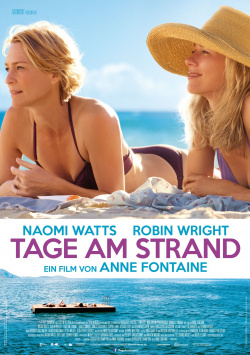 Days at the Beach

Since childhood, Roz (Robin Wright) and Lil (Naomi Watts) have been inseparable friends, living a near-perfect life in an idyllic town on the Australian coast. They share everything with each other, and are like sisters who stand by each other in good times, but also in hard times. Even when Lil's husband is killed in a car accident, Roz manages to catch her friend in her grief. But then comes a summer when the close relationship between the women and their families is put to the test. For Roz` husband Harold (Ben Mendelsohn) receives a tempting job offer from Sidney University which he is too eager to accept, firmly assuming that Roz and their mutual son Tom (James Frecheville) will accompany. Although Roz opens up to him after a brief period of consideration that she will not be going to Sidney, Harold accepts the teaching job. For the women, who remain by the sea with their sons, a very special summer now begins in which taboos are broken and new passions are discovered - a summer that will change everything.

Days on the Beach is an adaptation of the story The Grandmothers by the recently deceased Nobel Prize winner for literature Doris Lessing. Oscar winner Christopher Hampton adapted the book, which director Anne Fontaine then turned into a very unusual love story on picturesque locations in Australia. The film is carried not only by the wonderful images that Christophe Beaucarne captured with his camera, but also by the two strong leading actresses Naomi Watts and Robin Wright. For they do not only radiate a purely optical attractiveness. Their play also transports the longings of the two friends so comprehensibly on the screen that the story, which seems rather contrived, gets a certain credibility, through which the emotional effect of the events is intensified.

When Roz and Lil's son Ian (Xavier Samuel) cross a line that could destroy this very special friendship between the two women, the audience feels for the protagonists, as Fontaine succeeds very well in building a bond between her characters and the audience in the first scenes. It's all very worn and occasionally a wee bit campy, but nonetheless also extremely stirringly staged. However, over the nearly two hour running time, this impression unfortunately can't hold up.

Fontaine gets increasingly lost in the beautiful imagery and in scenes that don't really move the action forward. It's still great acting and beautiful to look at, but unfortunately it's also a bit inconsequential. The moral dilemma that the film so carefully sets up in the first hour feels nowhere near as exciting here as it did at the beginning of the story, despite a few dramatic moments. It is solely thanks to the very authentic acting of the actors and the coherent chemistry between them that Days on the Beach still works here. Nevertheless, more and more the impression is confirmed that a somewhat denser, not quite so carried staging would have been quite advantageous for the effect of the story on the viewer.

Because in the end the film raises some really interesting and exciting questions, whose construction, however, promises more than the staging can hold in the end. Still, despite the weaker second half, Days on the Beach is on balance a beautifully filmed drama with interesting female characters and a convincing ensemble of actors, which in the end is enough for a satisfied worth seeing!

Cinema trailer for the movie "Days at the Beach (Australien/Frankreich 2013)"
Loading the player ...