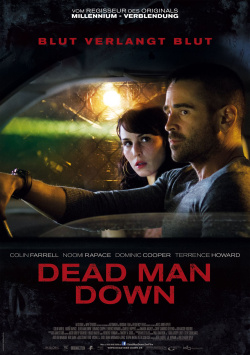 After the worldwide success of the Stieg Larsson film adaptation Blinding, director Niels Arden Oplev has now made the leap to Hollywood. He delivers a compelling U.S. debut with the thriller Dead Man Down, but it never manages to match the gritty power and staying power of Disappearance and, despite some very strong moments, ends up being little more than good mediocrity.

The film tells the story of Victor (Colin Farrell), who works for New York underworld boss Alphonse (Terrence Howard). He's starting to get scared, as an unknown man has been murdering members of Alphonse's crew for some time, and then sending cryptic messages to the gangster. Although Victor's best friend Darcy (Dominic Cooper) doggedly sets out to unmask the identity of the mysterious killer in order to finally move up in the gang's hierarchy, the stranger continues to murder unchallenged.

At the same time, the taciturn Victor meets Beatrice (Noomi Rapace), a French woman who lives in the house across the street from Victor's apartment. Since an accident disfigured her face, Beatrice has completely retreated into her own little world. She is convinced that Victor can help her. For she knows a secret that she will use to make him get what she has been craving since the accident: revenge!

Dead Man Down is very quietly told for long stretches. Oplev's production is almost as taciturn as his main character Victor. But it's because of the many silent scenes that the more action-packed moments of suspense feel all the more powerful. With very stylish imagery and strong performances from its actors, the film builds a very atmospheric tension that is hard to escape, although the plot twists interspersed are not really surprising.

Unfortunately, however, not all the pieces of the puzzle that Oplev very leisurely puts together work equally well. For instance, the character of Beatrice's mother, played by Isabelle Huppert, is completely superfluous and even comes across as downright annoying in some scenes. In addition, the plotline around Nicolas and Beatrice develops some lengths towards the end, which are even more obvious due to the fact that Oplev suddenly increases the pace drastically at the end. Finally, the very leaden finale almost feels like a foreign body in the otherwise rather carried narrative events. Although it's very well staged and has some really spectacular moments to offer, it lacks the uncompromisingness at the end that would have actually been expected due to the dark basic atmosphere of the story. Rather, it seems here for the first time in the film, as if Oplev had to compromise for his Hollywood bosses.

Despite these criticisms, Dead Man Down has become, on balance, a good gangster and revenge thriller, which consoles with its atmospheric images and good actors over many a weakness. If you don't expect more than solid suspense cinema, you can safely watch the Hollywood debut of Niels Arden Oplev. Worth seeing