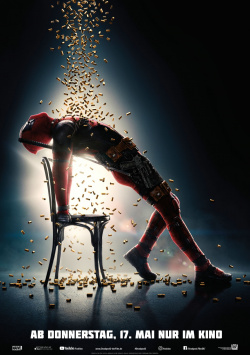 Wade Wilson aka Deadpool (Ryan Reynolds) is back! The superhero with the pointy tongue is now chasing bad guys around the globe, and of course making some dangerous enemies along the way. They can't hurt him, but they can hurt the person he loves. When that's exactly what happens, Deadpool sets out on a self-destructive quest for revenge. But there's not much time to bathe in grief and self-pity. Because a new antagonist emerges in the form of the mysterious Cable (Josh Brolin), who seems to be Deadpool's equal. For some reason, Cavle has it in for the young mutant Russell (Julian Dennison), whom Deadpool wants to protect at all costs. But to stand a chance against Cable, he'll have to team up with other superheroes - so time to bring the X-Force into being.

After the huge success of its predecessor, expectations for Deadpool 2 are naturally huge. To meet them seems almost impossible, since the first part could benefit from a surprise effect, which a sequel of course inevitably lacks. The fact that David Leitch (John Wick, Atomic Blonde) took over the director's chair from Tim Miller, who dropped out of the sequel after creative differences, as they say in Hollywood, did not bode well. But even if Leitch's staging turned out a bit cruder and the film overshoots the mark a few times, it's fair to say: Even the second screen appearance of Ryan Reynolds as Wade Wilson (strictly speaking, it is the third, but that Deadpool's cinema premiere in Wolverine: Origins will be forgotten, this unusual superhero already ensures itself) is quite a lot of fun.

Naturally, Part 2 follows the usual sequel rules: What worked in Part 1 is revisited, always with a twist. The result isn't always convincing, but when a scene hits the mark, it really does. For the faint-hearted this is of course nothing, because here is not only cursed what the stuff holds, there are also quite a few body parts flying across the screen. And who can not laugh at humor below the belt so at all, for which a sequence is guaranteed to torture.

Who, however, already had fun in the first part, which could experience here even greater cinema pleasure. Aside from the fact that the whole thing starts off funny but also extremely dark, there are several aspects to the film that are much funnier and also more surprising than in its predecessor. This includes the X-Force, as well as Deadpool's antagonist Cable, who is played magnificently by Josh Brolin. More will not be revealed at this point, of course.

Deadpool 2 is bloody, cynical, dirty, gritty, funny and hugely self-deprecating. That in particular still works very well the second time around, but you can already tell that it's going slightly over the top. Should there be a third solo film for Deadpool, then the makers would really have to come up with something new, so that this inherently really great and refreshingly different superhero does not wear out too quickly. With plenty of references to the Marvel and DC universes, a great cameo appearance that only lasts a split second though, and a great soundtrack (the James Bond style opening credits with Celine Dion mega ballad is hilarious), Deadpool 2 offers good laughs, action, and a tiny bit of suspense too. What more could you want!!! Absolutely worth seeing!