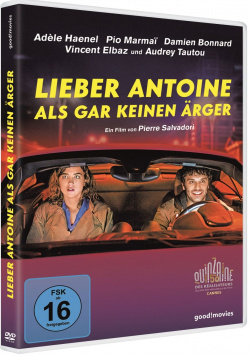 Better Antoine than no trouble at all - DVD

Movie: It has been two years since the death of Commissioner Yvonne's (Ad&egrave;le Haenel) husband. Two years in which she has spent every evening telling her son about the exploits of his father, the former police chief. But then she accidentally learns that her hubby had quite a bit of dirt under his white vest and was deeply involved with the underworld of Marseilles. When Yvonne finds out that an innocent man has been in prison for eight years for a crime her husband committed, she wants to help the man after his release. But the visibly confused Antoine (Pio Marma&iuml;) doesn't exactly make it easy for her, as he now wants to commit such acts without consideration, for which he has already served a sentence. Yvonne must now try everything to save Antoine from himself and from her colleagues before he finds out who she is.

The comedy Lieber Antoine als gar keine Ärger begins with a delightfully over-the-top action dream sequence that reveals to the viewer right in the first few minutes where the journey is headed here in terms of humor. Director Pierre Salvadori skillfully mixes silly slapstick, black humour and subtle wit into a successful whole. Not every gag hits the mark and especially towards the end the whole thing runs out of steam. The finale, for example, feels a bit rushed, especially since the film takes a lot more time in other moments.

What saves the film from being a very simplistically knitted romp is the fact that there is also always room for quieter character moments and even a bit of romance. Salvadori manages to give his characters quite interesting facets, which also saves the production over a few weaker moments. In addition, the director also manages to incorporate a few surprises into the story, so that the film feels pleasantly original despite some familiar set pieces.

Charmante characters, a turbulent production and plenty of delightful comedy make Lieber Antoine than no trouble at all to quite a fun, which should not be missed by fans of wacky action comedies. For this there is - with minimal deductions in the B grade - a clear: Absolutely worth seeing!

Picture + Sound: The picturesque locations in Marseilles come thanks to a powerful color scheme to good effect. In addition, the image of the DVD also convinces with a pleasant image sharpness, which also in the many darker moments details come neatly to the fore. The sound is present as a powerful Dolby Digital 5.1 mix, which in addition to the dialogue and music here and there also by various sound effects to offer good surround moments.

Conclusion: Better Antoine than no trouble at all is a quirky comedy that mixes action, slapstick, black humor and a dash of romance into an entertaining whole. A few original ideas and good actors console over some minimal hangs. The DVD offers the film in good picture and sound quality, but there is no bonus material. For friends of French comedy cinema absolutely recommendable!