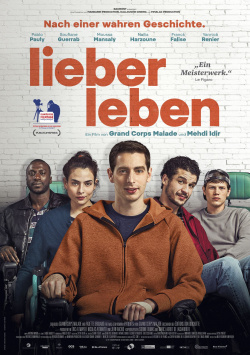 Actually Benjamin (Pablo Pauly) still had so many plans for his still young life. But from it now probably nothing more becomes. Because after a cervical vertebrae fracture he will probably never walk again. He can't make a phone call, go to the toilet or eat anymore either. He just lies in his bed in the rehabilitation clinic and faces a hard time. Although many gloomy clouds hang over his future, Benjamin is not ready to give up. Much frustration is lifted by small successes in rehab, but also by friendship with other patients like Farid (Soufiane Guerrab). And so, slowly but surely, Benjamin trains himself back into life, defying despair with a lot of fighting spirit and humor.

Fabien Marsaud, who became known as hip-hop artist Grand Corps Malade, had a serious accident in 1997 that left him partially paralyzed. Although it was initially said he would never walk again, after hard and intense training he was able to walk with a cane in 1999. A few years later, he took off in the poetry slam scene before making his breakthrough as a musician in 2006. In 2012 he then published his autobiographical novel Patients, which he has now made into a film himself together with Mehdi Idir.

Lieber lives uses fictional characters to recount his true experiences while in rehab. The film was even shot at the clinic where Grand Corps Malade did his rehab. It is a very personal film that, despite its very heavy subject matter, is infused with an infectious joie de vivre and a refreshing lightness of touch. The two directors have managed to strike a balance between drama and humour. Embedded in this are very true-to-life characters who skilfully avoid the stereotypes of similar type films.

Lieber leben is full of moments that could have easily seemed cheesy or contrived. But the pleasantly unsentimental and yet very sensitive, charming staging turns these moments into quite wonderful scenes that result in a film that goes to the heart, strains the laugh muscles and stimulates the tear gland a little. An entertaining hymn to friendship, humanity and life with all its positive and negative facets. Or in short: A wonderful film that simply makes its audience happy. For this there is a deserved: absolutely worth seeing!

Cinema trailer for the movie "Rather live (Frankreich 2016)"
Loading the player ...