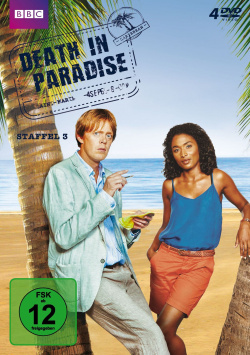 Film: Detective Inspector Richard Poole (Ben Miller) has just settled in to Saint Marie and has become warm with the special way his colleagues work, when he himself becomes the victim of an assassination attempt. At a meeting with friends from university, the policeman is found with a knife in his chest. Camille (Sara Martins), Dwayne (Danny John-Jules) and Fidel (Gary Carr) are shocked but still want to solve the murder of Poole as soon as possible. To her support Humphrey Goodman (Kris Marshall) is sent from London to Saint Marie. The young investigator may be a little clumsy, but he has an ingenious talent for combination. And so it won't be long before Pole's killer is exposed. But of course this does not bring peace to the Caribbean paradise. And while Humphrey throws himself into work after one personal drama and solves one murder case after the other, his new team has to acknowledge, despite first doubts, that Poole has got a worthy successor...

The British-French co-production "Death in Paradise", filmed in front of the picturesque scenery of Guadeloupe in the Caribbean, goes into the new season with a bang. After only 16 episodes, lead actor Ben Miller leaves the series in the first minutes of the new season. Now the makers were faced with the difficult task of finding a successor who on the one hand would continue the tradition of the series and continue to offer cluture clash humour at its finest. On the other hand, it should not be a mere copy of Inspector Poole. With Kris Marshall ("Actually...Love") you have found the ideal solution. His Humphrey Goodman is much more open-minded and far less cranky than his predecessor. But with his clumsy nature and his somewhat clumsy attempts to integrate himself into his new environment, he always provides extremely amusing moments, which are in no way inferior to the humour of the first seasons.

Otherwise, little has changed in the structure of the series. Each episode deals with a closed criminal case that is solved in the classic "Whodunit" manner. At the end there is always a meeting with all suspects, in which Humphrey exposes the perpetrator in a way that strongly reminds of the methods of Miss Marple, Hercule Poirot and others. This very traditional narrative form is a lot of fun, especially since the makers always manage to lure the audience on the wrong track with sometimes dramatic, then again extremely weird methods.

As with the first two seasons, the new episodes of "Death in Paradise" really don't reinvent the wheel. But with the character of Humphrey Goodman, the series was expanded despite the loss of Richard Poole by a real sympathizer, who is also a real enrichment as an investigator. Humour, suspense, drama and picturesque landscapes - all this makes "Death in Paradise" a TV entertainment of a particularly successful kind. And that's why: even for fans who mourn Ben Miller a little afterwards, the new episodes of the third season are absolutely worth seeing!

Picture + Sound: The picture on the DVD is very clean, as on the previous seasons, and shows a very good overall sharpness, especially in the brighter outdoor shots, through which the picturesque holiday paradise in all its blaze of color comes into its own. In darker scenes there are some small deductions in the details, but for a TV production this is still on a good level. The sound is again only available in a stereo mix. But since the dialogues are the focus anyway, a big surround firework is not even needed. All in all, that's enough to attest the technical implementation a deserved "good!".

Extras: As a bonus, there is a Making of (approx. 18:02 min.) consisting of several shorter clips, which takes a quite interesting look behind the scenes of the third season and at the cast changes. Since there are unfortunately no subtitle options here, this feature is only worth seeing for interested viewers with a good knowledge of English!

Fazit: The third season of "Death in Paradise" brings big changes, as the previous main actor Ben Miller already blesses the temporal after a few minutes. With Kris Marshall a good successor was found, who doesn't just represent a copy of Richard Poole, but with his very own character brings a breath of fresh air to paradise. As before, the individual stories are staged in the typical "Whodunit" style, which will be a lot of fun for lovers of classic Agatha Christie stories. On DVD the series presents itself again in good picture and sound quality in the third year. The bonus material is a bit lean, but worth seeing for fans. Therefore there is also a clear one for this third season: Recommended!