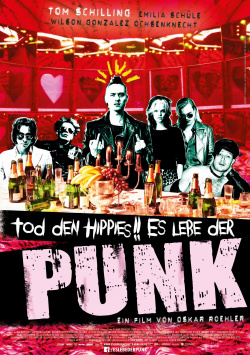 It's the early 80s, the time of nasty hairstyles, shoulder pads and disco fox: Schoolboy Robert (Tom Schilling) is fed up with life in the West German provinces. He finally wants to experience something and break out of the conformity of the small town bourgeoisie dominated by hippies. The perfect place for this seems to be West Berlin. This is where punk rules. Through his old buddy Schwarz (Wilson-Gonzales Ochsenknecht) Robert gets a place to stay and a job in a peep show. But scrubbing jerk-off booths isn't exactly what Robert had in mind for his new freedom. But the work also has something good, he meets the beautiful Sanja (Emilia Schüle). At her side, Robert dives deeper and deeper into the anarchic subculture of West Berlin, loses himself in drugs and alcohol and dreams of a better life with Sanja. But to finance this, Robert desperately needs more money than his thankless job and the surprisingly lavish Berlin allowance bring in. A visit to his father (Samuel Finzi) gives the young couple an idea of how they could solve their family and financial problems at the same time...

Oskar Roehler is really not a conformist filmmaker. If you go to a Roehler film, you should generally never expect mainstream truths suitable for the masses. Even if some of his works can appeal to a broader audience, his sometimes very idiosyncratic style is rather something for the friends of the more special film. His latest work Death to the Hippies - Long Live Punk is no exception. It is a shrill, sometimes almost grotesquely overdrawn look at life in West Berlin in the 1980s. It is a world between revolution and lack of perspective, between petting and pershings, in which punks, gay Nazis and strippers live in a subculture determined by alcohol, drugs and sex.

It is a film of contrasts: sometimes almost clamorous-comic, then again dirty-dramatic, sometimes garishly colorful, then again dreary-black and white. Such contrasts run through to the soundtrack, where 80s disco queen Sandra is sometimes replaced by quirky punk rock. Even if the whole thing seems to be completely overdrawn stylistically and dramaturgically, the attitude towards life that Roehler creates here somehow seems very authentic. That the actors had a lot of fun with this unusual project can be clearly seen in many scenes (especially great: Frederick Lau as a gay Nazi with the courage to be ugly). Tom Schilling in particular manages to convince brilliantly in both the humorous and the dramatic passages.

For someone who is so totally out of touch with punk culture, Death to the Hippies - Long Live Punk is very difficult to access. The film is dirty, nasty, unadorned and vulgar. The smell in the peep show, which triggers a nausea in Robert at the beginning of his job, you also seem to be able to smell as a viewer. And this kind of realism is really not everyone's cup of tea. But if you have a soft spot for the films of Oskar Roehler or if you experienced the punk scene of the 80s yourself, you might have a lot of fun with this extremely ironic contemporary document. And for it there is then also under the line a deserved: Worth seeing!

Cinema trailer for the movie "Death to the Hippies - Long Live Punk (Deutschland 2014)"
Loading the player ...