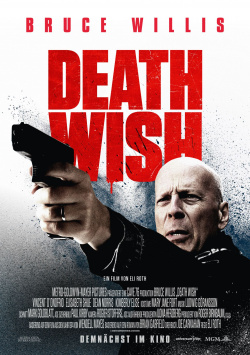 Renowned physician Dr. Paul Kersey (Bruce Willis) leads an almost idyllic life with his wife Lucy (Elisabeth Shue) and their daughter Jordan (Camila Morrone). He is successful in his job, lives in a nice house and the only conflict he faces is the fact that his daughter will soon leave home and go to college. But this ideal world is abruptly shattered when Lucy and Jordan are attacked by burglars in their home, killing Lucy and sending the girl into a coma. For Paul, a world comes crashing down. He, who always remains calm and level-headed, is suddenly overcome with grief, anger and a desire for retribution. The police, completely overwhelmed with the ever-increasing crime rate in the city, are also in the dark about this case. And so Paul decides to simply take the law into his own hands.

Death Wish is a remake of the 1974 novel adaptation A Man Sees Red starring Charles Bronson. The revenge thriller, which was banned in Germany until recently, was such a success that it has spawned several sequels and now a remake. This one leaves a somewhat ambivalent feeling, especially given the political mood in the US. On the one hand, director Eli Roth seems to tackle the vigilante issue and the relationship of many Americans to their guns here almost satirically. A humorous-looking, but unfortunately very much in line with reality commercial and a subsequent visit by Paul in a gun shop let this feeling arise. Also, the violence, which is in places badly overdrawn, can definitely be understood as cynical irony.

But then there are scenes like the final dialogue between Paul and cop Raines (Dean Norris), which come across as if Roth shares the utterly twisted view that the only thing that can stop a bad person with a gun is a good person with a gun. Death Wish therefore leaves a rather bitter aftertaste, which also affects the overall impression. It's actually quite positive, if it weren't for the somewhat indecisive handling of the topics vigilante justice and gun politics. Because apart from some lengths and clichés, the remake is a thoroughly exciting revenge thriller with a good Bruce Willis, who makes a good figure as a merciless avenging angel also with over 60.

Eli Roth got a lot of things right with this remake, but every once in a while he also missed the mark big time. But what you have to give the film credit for, despite all the justified criticism, is that it is consistently exciting and entertaining. Even though there are a lot of clichés used and the story isn't exactly cleverly constructed, there's never any real boredom. As a vigilante thriller this version of Death Wish works really well. Now if the script would have been a bit better and more profound, then it would have given a clear thumbs up. But so there is the worth seeing only with some restrictions!