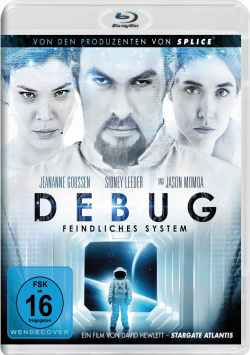 Movie: In the future, computer programs have become extremely powerful. To avoid losing full control of them, a group of convicted cybercriminals are tasked with cleaning up and, if necessary, deleting some faulty programs on various space freighters. When the repair of an Orcus freighter is ordered on short notice, everything looks like a routine job at first. What the inmates and their warden don't know, however, is that the spacecraft is a former prison freighter where the guardian program IAM (Jason Momoa) has taken on a dangerous life of its own. It's not long before the attempts to shut down IAM claim their first victim. But in the tough hacker Kaida (Jeananne Goossen), the murderous computer program has found a serious adversary...

With Debug - Enemy System, director David Hewlett (Stargate Atlantis), who is also known as an actor, has staged a sci-fi cyberthriller that, especially at the beginning, reminds a little of the concept of the series Add a Friend. Most of the time you watch the protagonists via screens or surveillance cameras, and especially at the beginning even the actions of the convicted cybercriminals seem to be limited to sitting and typing. That doesn't sound very exciting - and apart from the hypothermic atmosphere of the Orcus freighter, it isn't. It's only when Kaida realises how powerful IAM is and she does everything she can to get herself and the others out of the spaceship alive that things pick up.

There are some thoroughly enjoyable moments and decent tension. But unfortunately this is not enough to console over the sometimes very poor effects and the sometimes very wooden acting of some actors. However, despite the low budget, you can always tell that Hewlett and his team approached the production with a love for the genre. Sure, even a series like Stargate Atlantis has better computer effects to offer at times. And the script could have done a lot more with the good premise as well. But as a pure B-movie, the fight against a murderous computer program offers absolutely decent entertainment.

With a little more money and a better script, Debug - Enemy System could have been a really good sci-fi thriller. As it is, the film still became an acceptable B-movie, especially in the second half, which lives on the passion of the director, the atmospheric set and some successful moments of suspense. So if you lower your expectations and can just overlook the effects on videogame level, you will still be well entertained and can confidently enter the Orcus freighter.

Picture + Sound: Debug - Enemy System is not an expensive Hollywood production, but a small independent film from Canada. As such, not too much should be expected of the audiovisuals. There are some noticeable weaknesses in both areas, but for a small production like this, both the absolutely clean, largely sharp picture with its atmospheric undercooled colouring, as well as the sound with its neatly implemented sound effects and the well intelligible mixed dialogue can convince. Good!

Extras: As a bonus, in addition to the trailer, there is a quite worth seeing look behind the scenes (approx. 18:11 min.), which reveals with what ambitions David Hewlett approached the production of the sci-fi cyber thriller.

Conclusion: Debug - Enemy System is low budget sci-fi fare that doesn't necessarily score with great effects or a polished script. Still, it's noticeable that director David Hewlett has approached the film with a love for the genre and a very exciting story at its core. The result is solid B-movie fare with a slight trash factor. Nothing more, but nothing less either. On the Blu-ray, the film presents itself in good picture and sound quality. The bonus material offers a nice look behind the scenes, where the ambitions of the creators are better apparent than in the finished film. Not a masterpiece, but in the end just recommendable!