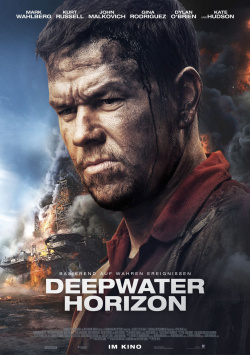 2010: About 70 kilometres off the US coast, the Deepwater Horizon oil platform is supposed to extract over 100 million barrels of oil from the Gulf of Mexico on behalf of the BP corporation. With every day that passes until the start of production work, BP is making losses. As a result, executives are reluctant to agree to further tests, but in the eyes of chief technicians Mike Williams (Mark Wahlberg) and Jimmy Harrell (Kurt Russell), they are absolutely necessary to ensure the safety of the people working on the platform. Although the technicians get their way and a test shows that the pressure on the well is far too high, BP orders production to begin. And suddenly what should have been prevented at all costs happens: a blowout occurs, the consequences of which become an unimaginable catastrophe not only for the workers on the platform but also for the environment.

With Deepwater Horizon, director Peter Berg (Lone Survivor) delivers a stirring retelling of the dramatic events of the night of April 20, 2010. At times, he applies a little thick, but overall, the retelling of the disaster is extremely gripping and exciting implemented. The platform was faithfully recreated in a huge water tank and Berg also largely sticks to the facts that have been handed down. Of course, the film also takes some liberties, for example with the very one-dimensional drawing of the characters. And even in the dialogue, there's a little too little emphasis on realism in favor of dripping pathos.

But the production easily makes up for that with its high level of tension and intensity. What makes the film so particularly exciting in the truest sense of the word is that it does a very good job of showing that this catastrophe, which not only claimed human lives but also caused enormous damage to the environment, could well have been avoided if decisions had not been made purely for profit and if, at the right moment, a little less obedience to the big bosses had not clouded the common sense of someone in charge. When it becomes clear that the people who died here could still be alive, as well as the many marine animals and birds that have perished miserably as a result of the pollution of the Gulf of Mexico, it just makes you angry. And that, of course, intensifies the impact the film already has.

Peter Berg is not necessarily a man for subtle tones. His films are very straightforward works that usually score points for their magnificently executed action. And that is also the case here. Acting-wise, the whole thing is average mainstream fare. Mark Wahlberg, Kurt Russell or John Malkovich all deliver solid performances, but offer nothing that you would have seen from them countless times before. What makes the film so successful in the end is the spectacular - if one may use this term in view of the catastrophe - retelling of the true story that shocked the whole world six years ago - and whose effects on the ecological balance of the region can still be felt today. Despite some weaknesses in the script, there is therefore also a very clear bottom line: absolutely worth seeing!