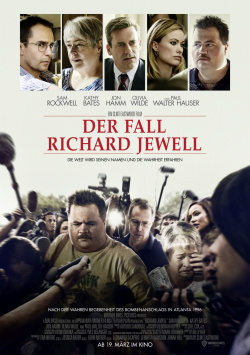 1996: Richard Jewell (Paul Walter Hauser) would like to be a real cop. But his somewhat simple-minded way always gets in his way. But even as a security guard Jewell feels like a real lawman. And so during a celebration for the Olympic Games in Atlanta, he also meticulously makes sure that the rules are observed. In fact, it is his seemingly excessive attention that saves countless lives. For when Jewell discovers a suspicious backpack, it turns out to be a bomb. The inconspicuous security guard then becomes a hero - until only a few days later he himself becomes the focus of the investigation. For the press this is a real find, because Jewell fits much better into the picture of a confused bomber than into that of a shining hero. He desperately seeks help from anti-establishment lawyer Watson Bryant (Sam Rockwell) - but is he strong and clever enough to clear Jewell's name against the accusations of the FBI, police and press?

With "The Richard Jewell Case" Clint Eastwood once again stages a story based on true events. Security guard Richard Jewell, who died in 2007, was suspected of being responsible for the bombing of Atlanta's Centennial Olympic Park, which probably claimed only two lives because of Jewell's intervention. The drama vividly illustrates how Jewell was stigmatized as a terrorist precisely because of the prejudgement of the press, which did not want to sell him as a glowing hero. His manner and his appearance fit perfectly into this picture, which is why especially the tabloid press is literally pouncing on him to tear him apart.

Paul Walter Hauser plays the role of the good-natured, but also somewhat simple-minded Richard Jewell really great. On the one hand you can see that his heart is in the right place, but on the other hand you can also understand why outsiders found him strange or maybe even a little exhausting. Kathy Bates is great as Richard's caring mother - no wonder she was nominated for an Oscar. But the film's secret star is Sam Rockwell, who makes every minute he is seen as a quirky lawyer a treat. Praise is also due to Olivia Wilde, who brilliantly masters her very thankless role as an unscrupulous reporter who is willing to sacrifice a person's reputation for a good headline.

With a running time of over two hours, "The Case of Richard Jewell" is a bit tough in some parts. Nevertheless, the now 90-year-old Clint Eastwood has staged a powerful drama that can score with a stirring story, a great ensemble and a few extremely stirring moments. Not really a great masterpiece, but a very good movie, that more than deserves an "absolutely worth seeing".