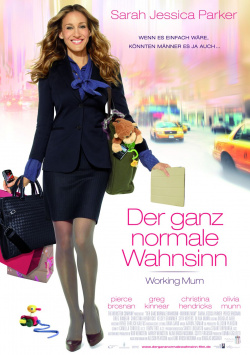 Sarah Jessica Parker once again plays a fashion-conscious success woman in her new film The Normal Madness - Working Mum. However, unlike in Sex and the City, she spends her time here not choosing the right shoes or meeting her girlfriends, but desperately trying to balance children and career.

And that's not really easy for Kate, the manager of a Boston fund company. While she wants to be present at as many school events and children's birthday parties as possible, her professional success is also hugely important to the power woman. It still seems that Kate and her husband Richard (Greg Kinnear) have developed a successful system to manage the difficult balancing act, but more and more it becomes clear that their two children suffer more from their parents' hard work than Kate wants to admit. But now, of all times, she is given the opportunity to take on a major project that would require her to travel frequently to New York and work alongside the smart Jack Abelhammer (Pierce Brosnan) - a real test of her marriage and her role as a loving mother.

Director Douglas McGrath's adaptation of Alison Pearson's best-selling Working Mum, which Aline Brosh McKenna (The Devil Wears Prada) has adapted into suitably scripted form, is conceived as an inoffensive comedy for Sex and the City audiences. Here, as there, Sarah Jessica Parker's character comments on the action, leaving the genteel female audience to poke fun at such things that many women can relate to. This then works very well in some scenes, especially as McGrath has assembled a good ensemble of actors around Parker who can easily play over some of the script weaknesses.

Particularly Olivia Munn as Kate's junior partner Momo with absolute phobia of children and relationships, Mad Men sin Christina Hendricks as loyal girlfriend Allison and an as always extremely smart Pierce Brosnan as extramarital temptress Jack make for some amusing scenes worth watching. At other moments, however, the weak clichés dominate the action to such an extent that even the charismatic actors can't compete with them.

Not always does McGrath deal so amusingly with the supposedly everyday problems of a mother, such as the obligatory lice at school or the listless nanny. Often the observations the film makes are nice, even kind of amusing, but simply too innocuous to be truly good entertainment. The bite of Sex and the City, at least of the series, or of The Devil Wears Prada, is missing in most moments of The Normal Madness - Working Mum. Too harmlessly the action ripples along, so that one is not really badly entertained, but just not as well as it could be.

The Quite Normal Madness - Working Mum is a nice women's film of the more harmless variety. The actors and some very nice moments do save the comedy from being totally average. But if you expect a biting satire on life as a woman between child and career, you will be disappointed by the shallow production. Therefore: Only with restrictions just worth seeing!