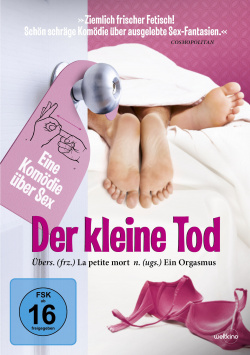 The Little Death - A Comedy About Sex - DVD

Film: Bourgeois row houses, regular income, seemingly intact family world - for five thirty-something couples from a nondescript Australian suburb, everything actually goes according to plan. Only in the bedroom there are many complications. For the road to orgasm, which the French so aptly refer to as la petit mort (the little death), reveals many an unusual fantasy in the couples, from submission to role-playing to phone sex. But whether the partners are willing to act on these fantasies, and whether the relationships are actually fueled with new fire as a result, may soon be doubted...

The Little Death is subtitled A Comedy About Sex. Those who have seen comedies about bees and flowers in the recent past are likely to expect another rather shallow collection of zottos in the style of Sex Tape and its ilk with this one. But even if director and leading actor Josh Lawson explores some abysses of sexual fantasies, his comedy remains relatively chaste and presents itself instead pleasantly clever and sometimes deliciously evil. Yet it all starts off very well-behaved as we are introduced to Paul (Josh Lawson) and Maeve (Bojana Novakovic), Phil (Alan Dukes) and Marueen (Lisa McCune), Evi (Kate Mulvany) and Dan (Damon Herriman), Rowena (Kate Box) and Richard (Patrick Brammall), and Monica (Erin James) and Sam (T.J. Power). The introductory glimpse into their daily lives and love lives is one of well-behaved normalcy and a bit of stuffiness. But that's over when some of the protagonists reveal their sexual preferences - whether to their partner or just to the audience.

Here Lawson breaks some taboos, but does it in such a charming and original way that you can't stay mad at him at all. Sure, at times the laughter gets stuck in your throat. But when Paul, for instance, after his Maeve's rather shocking confession that she is aroused by the idea of a sex crime, tries everything to give his great love the sexual fulfillment he thinks she deserves, it's just wonderfully funny. And what Phil comes up with to get his wife Maureen to fall asleep because that's the only way he can find satisfaction is also funny in an equally irreverent way, as is Rowena's realization that she is aroused by her lover's tears.

As is so often the case with episodic films, not all the stories told work equally well. But there are pleasingly few hang-ups in The Little Death. Probably the finest story is that of Monica, who works as a sign language interpreter for a telephone service and is assigned to interpret Sam's conversation with a sex hotline. What ensues, despite various salaciousness, is arguably the most romantic thing to hit the comedy genre in recent months.

Josh Lawson manages the feat with his relationship comedy of tackling difficult taboo subjects that you would never actually laugh at, and presenting them in such a way that you are first surprised and then thoroughly entertained by their comedic potential. The way he then brings the individual storylines together at the end for a delightfully wicked finale is simply magnificent. Certainly, The Little Death is not for the feint-hearted or for those viewers for whom humor always has to be politically correct. But if you want to see a really original comedy and can laugh about black humor and irreverent taboo breaks, you should not miss this Australian insider tip. Absolutely worth seeing!

Image + Sound: The good colouring and decent overall sharpness, alongside the lack of smudging or noticeable blurring, make for an all-round positive impression. The same goes for the audio, which shows just how good the Dolby Digital 5.1 mix really is in the more action-packed moments with decent dynamics. But even in the many scenes where dialogue takes the lead, there's little to fault in the DVD's sound. Good!

Extras: As a bonus, there are eleven promo interviews with the creators and actors (about 23 min.), in which there are quite interesting things to learn. In addition, there is a short look behind the scenes (approx. 10 min.), the trailer and other program tips from the provider. Good!

Conclusion: The Little Death is a pleasantly original comedy with plenty of black humor and irreverent taboo-breaking. If you can laugh at that sort of thing, you'll undoubtedly get one of the funniest relationship comedies of the year here. The DVD leaves an all-around positive impression in terms of picture and sound. The bonus material is not particularly extensive, but quite okay. Overall, this is all enough for a clear: Absolutely recommended!