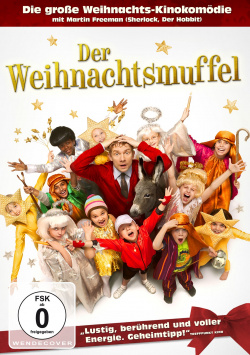 Film: Once primary school teachers Paul (Martin Freeman), Jennifer (Ashley Jensen) and Gordon (Jason Watkins) were a well-rehearsed team. But when Paul and Jennifer became a couple, jealousy grew in Gordon, culminating in a relentless rivalry between Paul and Gordon when the two separated five years ago. Every Christmas, Gordon puts on the most elaborate productions of the Christmas story, while Paul at his school approaches the matter rather listlessly. Since Jennifer left him at Christmas of all days, he has been a real Christmas muffle. But this year it's enough for Paul. He claims without further ado that his Christmas musical would be so spectacular this time that even Hollywood would come to Coventry. After this completely invented assertion, the little village stands on its head. Everyone is convinced that their child will have a great career in Hollywood. And Paul now has to try with the help of the unconventional assistant teacher Mr. Poppy (Marc Wooton) to fix his mistake without losing face in front of Gordon or his students...

"Der Weihnachtsmuffel" is a musical Christmas comedy for children and everyone who is looking for British humour of a somewhat simpler but not uncharming kind. Director Debbie Isitt ("Confetti"), who has already turned off the continuation of this festive fun, mixes catchy music numbers with child-oriented jokes, which are sometimes very amusing, then threaten to degenerate into unrestrained silliness again. The children sometimes act a bit over-excited, but all in all have an infectious charm, which makes the movie very amusing and worth seeing, especially during the big final performance.

Goodly chosen is also "Hobbit" Martin Freeman. As a grouchy teacher who has lost all desire for Christmas because of his broken heart, Freeman ("Sherlock") provides some really good laughs especially in the first third of the comedy. At the same time, he is also with his very special nature, which has already made his characters very charming in the past (as for example in "Actually...Love"), a big sympathizer, which pays off especially in the finale.

Other characters on the other hand, especially archrival Gordon Shakespeare and the foolish Mr. Poppy, are portrayed in a very exaggerated way. Especially Mr. Poppy with his rather infantile jokes is clearly aimed at a younger target group and should make smaller viewers in particular laugh heartily. Adults, on the other hand, could quickly be annoyed by this character.

In England, "The Christmas Grouch" was a complete success. Both the film and the catchy soundtrack made it into the upper chart regions and the DVD exploitation one year later proved to be extraordinarily profitable. That's why a second part is now allowed to start in 2012 - but without Martin Freeman, who has been replaced by ex-"Doctor Who" David Tennant. But since Freeman is one of the reasons why the movie still works, despite its obvious weaknesses, it's doubtful that the next "Christmas grouch" will be able to bring you into a good mood again. Because even though this first part doesn't really have what it takes to become a potential Christmas classic and a lot of potential is given away in favour of silliness, some nice and very amusing moments create a festive mood and warm the hearts of the audience. Merry Christmas!

Picture + Sound: During the visual conversion slightly exaggerated contrasts are noticeable, whereby the picture here and there a little too brightly and the colors converted in itself harmoniously a little too pale seem. The image sharpness is at a good level and the detail display is also convincing. Contamination or faults cannot be identified. The sound shows that the DTS mix is more powerful than the Dolby Digital 5.1 mix, both in the dialogues and in the songs. Even if the English soundtrack sounds a little more harmonious and the wordplay works better in the original anyway, the two German soundtracks are convincing both technically and in terms of content. Good!

Extras: In the bonus material the viewer can observe for 6 minutes how much effort has been invested in the dubbing of the songs for the German version. In addition, there is a ten-minute, uncommented look behind the scenes of the big closing show scene, as well as 27 minutes of interviews, the trailer for the film and further program tips from the provider. Gut!

Fazit: "Der Weihnachtsmuffel" is a festive comedy for the whole family, which doesn't have what it takes to become a modern Christmas classic, but with its harmless gags, the catchy songs and the likeable Martin Freeman ("Der Hobbit"), it's a great comedy to entertain younger viewers. The good technical implementation and the good bonus material also contribute to the fact that despite some weak points at the end still a "recommendable" one came out!