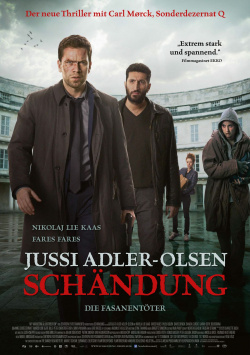 Carl M&oslash;rck (Nikolaj Lie Kaas) and his colleague Assad (Fares Fares) from Department Q are investigating again! After successfully solving the mysterious disappearance of a politician (Mercy), the two cops enjoy some freedom in their work. But when M&oslash;rck gets involved with a twenty-year-old case he had been working on after a cop commits suicide, the maverick investigator soon faces headwinds. Even Assad is initially convinced that the murder of two siblings, on file since a confession by the alleged killer, does not need reopening. But the longer M&oslash;rck delves into the case and the search for the mysterious Kimmie (Danica Curcic), a key witness, the clearer it becomes that perhaps the wrong person did pay for the crime after all. And so Department Q digs further and further into the past, coming dangerously close not only to human abysses, but also to very influential men.

Already Mercy, the first film adaptation of the Special Department Q novels by Jussi Adler-Olsen, offered lovers of Nordic crime fare suspense cinema at its best. Admittedly, the staging was quite conventional overall and was more on a very good TV level than really acting like a great cinema film. But some intense moments of suspense and the wonderful interplay between Nikolaj Lie Kaas and Fares Fares made the thriller a more than successful bestseller adaptation in the end. Desecration, the second cinematic outing of the unequal team of investigators, tops its predecessor in almost every respect. Since the relationship between the withdrawn loner Carl and the very fun-loving, open-minded Assad, despite all personal and professional setbacks, was already established in the first film, director Mikkel N&oslash;rgaard can this time fully concentrate on the story, which takes place on two time levels. Thus, he succeeds in filtering the full potential of tension from the disturbing events, without the cuts of the original, which must necessarily be made for a film adaptation, particularly negative notice.

About the plot should not be revealed too much at this point, of course. Because even if connoisseurs of the subject will not take too long to guess who the perpetrator/perpetrators are, the story has some very successful moments of surprise to offer, from which the film draws much of its nerve-wracking tension. However, Desecration is also much more brutal and depressing compared to Mercy. The squeamish might reach their limits during some scenes. Yet the brutality here is not used excessively, most of it still takes place in the minds of the audience. It is through this that the film achieves the effect of gripping its audience for the entire two hour running time and not loosening that grip even in the more predictable moments.

The cast are convincing across the board. In addition to the well-rehearsed team of Nikolaj Lie Kaas and Fares Fares, who seem to be firmly attached to their roles after just two films, Pilou Asb&aelig;k, known from the series Borgen, is particularly convincing as the shady hotel tycoon who is simply great. And Danica Curcic, shooting star of Danish cinema, also manages to leave a lasting impression as Kimmie, scarred by her past. They all contribute to the fact that Desecration, in contrast to its predecessor, is undoubtedly on a cinema level, not only dramaturgically but also in terms of acting.

Whoever appreciates dark, complex and disturbing crime thriller fare or simply loves the crime thrillers of Jussi Adler-Olsen, should definitely not miss this successful film adaptation. A great thriller that makes you want to see many more missions of Special Squad Q. Absolutely worth seeing!

Cinema trailer for the movie "Desecration - The Pheasant Killers (Dänemark/Deutschland 2014)"
Loading the player ...