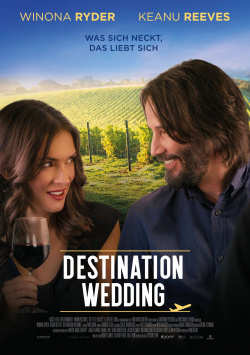 Bad enough Lindsay (Winona Ryder) has to go to her ex's wedding. To make matters worse, she runs into his brother Frank (Keanu Reeves), who comes across to her as a downright stinker after only a few moments. But also the impression Lindsay makes on Frank is not a good one. To him, she's just a self-pitying pain in the ass. The best thing for the two of them to do is to stay out of each other's way - but fate always brings them back together. And so something like sympathy grows out of the initial quarrels. But love can never be ... or can it?

Destination Wedding reunites after 26 years Keanu Reeves and Winona Ryder together in front of the camera. And at first, it actually seems like this comedic anti-romance has more bite than Dracula, who made their love difficult in their last film together. The way Frank and Lindsay drive each other crazy, despite being more alike than they might initially think, is charming and wittily realized. The whole thing works especially well, though, because the chemistry between Reeves and Ryder is just right.

Watching their caboodle would be even more fun, though, if the script were as good as the interplay between the leads. But alas, the dialogue isn't clever or biting enough to carry what is in itself a very thin story over 90 minutes. The beautiful pictures and the good acting duo can't do much against the fact that despite the rather manageable running time of the film, there are clear lenghts after half of the movie at the latest. Because at some point the conversations between Lindsay and Frank just go round in circles and the viewer knows long ago where the whole thing will end.

No question, Destination Wedding is a nice film that plays in an amusing way with the conventions of usual romantic comedies. But director Victor Levin relies too much on rampant dialogue and increasingly loses sight not only of the joke but also of the charm. For those who can be content with simply being nicely entertained and who aren't quickly annoyed by long conversations similar to those from Before Sunrise and its two sequels, this very romantic anti-romance can be recommended despite its flaws. Worth seeing