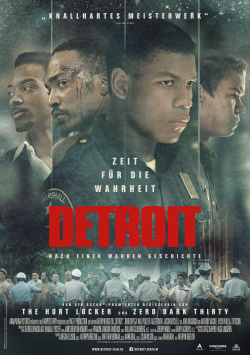 USA in the summer of 1967: The country seems like a powder keg. The Vietnam War has escalated and decades of oppression is causing unrest, especially among the African-American community. These soon escalate in many major American cities. This is also the case in Detroit, where violent civil rights riots break out. When shots are fired from a motel, the police arrive with a large contingent. Things quickly escalate and one of the guests is dead. But instead of a factual investigation, a raid marked by overt racism ensues, turning into a life-threatening situation for many of the motel guests present.

With Detroit, Kathryn Bigelow ventures into a very messy and volatile subject. Based on true events, the story may have been told half a century ago, but is unfortunately (not only, but especially) still very relevant in the US. After numerous interviews with eyewitnesses to the race riots and survivors of the events from the motel, Bigelow and her screenwriter Mark Boal (The Hurt Locker) have created a harrowing drama that takes some dramaturgical liberties but overall aims to recreate the events as accurately as possible.

First, it starts off with a very generic look at the riots, but then turns into an almost chamber-play-like thriller that stirs, enrages, and makes the desperation of the tormented almost palpable. It's an uncomfortable film that hurts - and that's exactly what it's meant to do. It's meant to hit viewers right in the gut, to punch them in the pit of the stomach with full emotional force, to make them realize what people can be driven to do by hate and prejudice.

Police officer Krauss, played with terrifying intensity by Will Poulter, is not a real person here, unlike other characters, but a conglomeration of various police officers involved in the incidents. He is effectively the personification of the hatred that caused the events at the motel to escalate to such an extent. It's a brave performance by Poulter, as his acting draws the concentrated anger of the audience and it will be very difficult to completely dislodge him from the impression he leaves here in other films in the future. Still, hats off to this performance! The same goes for the rest of the very strong ensemble cast, who rely on very nuanced, realistic acting, which perfectly suits the approach of the almost documentary-like production.

Detroit is a difficult film to watch, as it is extremely challenging. If you're willing to take it on, you'll be rewarded with an excellent thriller-drama that not only captivates over the course of nearly two and a half hours, but also lingers. A film you should definitely talk about after watching. Absolutely worth seeing!