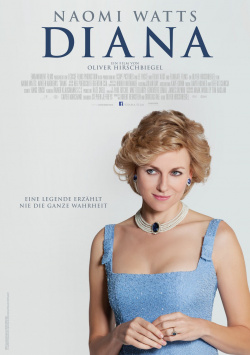 She was the Queen of Hearts, the most photographed woman in the world, whose life was repeatedly exploited in the tabloids down to the smallest detail in the years before her tragic death. To this day, Princess Diana remains a myth, a tragic, unapproachable fairy-tale figure who exerts a tremendous fascination. Oliver Hirschbiegel, director of the multi-award-winning The Downfall, is now attempting to approach this myth together with screenwriter Stephen Jeffreys. They were particularly concerned with Diana, who is already separated from Prince Charles and desperately trying to reorder her life.

But she just doesn't seem to want to quite succeed. She lives alone in Kensington Palace, rarely gets to see her sons and is besieged by the press at every turn. A dark veil lies over her everyday life, which begins to lift when one day she meets heart surgeon Dr. Hasnat Khan (Naveen Andrews). Diana quickly realizes that with this man she could find the private happiness that has eluded her in recent years. And what's more, by his side she finds the confidence and strength to use her popularity for projects close to her heart. While she steps more and more out of the shadows into the public eye to do so, she must continue to keep her relationship with Hasnat a secret. But this is becoming a more difficult test for her new love with each passing day.

Diana was made with the best of intentions and very good artistry. Inspired by a brief encounter that screenwriter Stephen Jeffreys once had with the charismatic Diana, and with the help of numerous conversations with people who knew her or were deeply involved in her life, the aim was to take the most realistic and dignified look possible at events that took place behind closed doors and about which there is only conjecture. With the engagement of Oliver Hirschbiegel, it should be guaranteed that a director will film the material who, on the one hand, has the technical skills, but also a certain impartiality towards the main character. And with the Oscar-nominated Naomi Watts a leading actress was found, who obviously made an effort to do justice to the myth of Diana as good as possible.

Despite all these good preconditions Diana unfortunately didn't become more than a normal love story on Rosamunde Pilcher level. This is quite nice to look at in some scenes, but in other moments the whole thing seems rather embarrassing. For example, when Diana and Hasnat see each other for the first time and soft focus is used in addition to the not-so-subtle music, it's just unintentionally funny and anything but romantic. Unfortunately, there are too many such moments, by which all the aspects of the film, no matter how felicitous, are more and more obscured. On top of that, the story is unnecessarily dragged out in the last third and any form of rousing narrative flow gives way to dignified boredom.

Sure, the film has its moments. The director and actors are just too talented to let a project like this go completely against the wall. Also, credit to the makers for not sensationalizing the fatal accident and really trying to focus on the woman behind all the headlines and scandal. Still, the script simply lacks the cleverness and depth, the staging lacks the bite and the actors lack the verve to make Diana a stirring and above all touching drama. Still: If you just want to see a simple love-monger, you'll be served quite well here. Nevertheless, the bottom line is only enough for a: very conditionally worth seeing!

Cinema trailer for the movie "Diana (USA/Großbritannien 2013)"
Loading the player ...