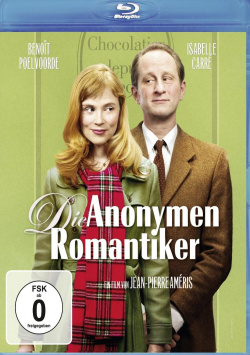 Film: Angélique Delange (Isabelle Carré) is a gifted Chacolatière. Her creations for Monsieur Mercier are legendary. For seven years, the extremely shy Angélique worked in secret and quietly enjoyed her fame. But when Mercier dies, she desperately needs a new job. The chocolate factory of Jean-René (Benoît Poelvoorde) could be the right place to continue to live her talent and passion for chocolate. It's just too bad that Jean-René is no less shy and always panics when he has to communicate with other people. And so there is a big misunderstanding during the interview and Angélique has to praise the chocolates of her new employer in the field - an absolute horror for the young woman. But it is only when Angélique and Jean-René discover their feelings for each other that things get really complicated...

"The Anonymous Romantics" is a playful French entertainment cinema of a particularly tasty kind. Benoît Poelvoorde ("Nothing to declare") and Isabelle Carré ("Back to the sea") are a very likeable and lovable couple - despite or even because of their emotional shortcomings. If, for example, Angélique faints immediately after her performance with her self-help group for highly sensitive people, or if Jean-René, on the instructions of his psychiatrist, desperately tries to touch another person, then this is not only enormously funny, but also very touching in a certain way.

Director Jean-Pierre Améris does not even try to create a realistic world. "Die anonymen Romantiker" is an uninhibited romantic fairy tale that plays only with set pieces of reality and incorporates them into the story with charming ease. The inability to communicate with one's fellow human beings and the resulting isolation is truly not a product of Améris' fantasy. Yet, this aspect of our social reality, which in itself is very sad, has been so magically transformed into a love story by the director that the viewer never runs the risk of being left frustrated.

On the contrary: the adorable main characters, the beautiful story and the luxurious portrayal of Angélique's chocolate creations make this romantic comedy a real treat for all lovers of light French entertainment and playful cinema tales. Absolutely worth seeing!

Picture + sound: The very clean picture of the Blu-Ray pleases with its warm colours, which make Angélique's wonderful chocolate creations particularly tasty. The sharpness is also in small details on a high level and even in darker moments there is hardly a visible loss of quality. Despite a DTS-HD master audio mix, the sound remains rather reserved for the genre, but dialogues and music come into their own and are refined by some harmonious ambient noises. Good.

Extras: At the heart of the bonus material is a 52-minute making of, which deals very comprehensively with the making of the film. A very charming and interesting documentary, which has a pleasantly low advertising character.

We continue with a detailed interview with the director (ca. 21 min.) and another interview with the two main actors (ca. 7 min.). A music video and the German trailer round off the extensive bonus material. German subtitles are available for all extras in French language! Very good.

Result: "The Anonymous Romantics" is a charming comedy, which is a real delicacy for all friends of French cinema of the particularly magical kind, not only because of the tasty chocolate creations filmed. The Blu-Ray presents the film in a good technical implementation and also has almost 90 minutes of worthwhile extras on board. All that makes this disc: Absolutely recommended!