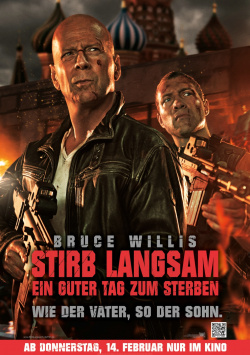 Yippie-Ya-Yeah, You Pig Cheeks! John McClane (Bruce Willis) is back to thwart some mighty bad guys' sinister plans. But while McClane has only been allowed to go on explosive crime sprees in America so far, in the fifth installment of the Die Hard series he finds himself in Moscow. Actually, McClane only wanted to visit his son Jack (Jai Courtney), who is in prison for alleged murder. For the cop the perfect opportunity to improve his very tense relationship with his offspring. By now it shouldn't surprise McClane that he once again shows up at the wrong place at the wrong time. His son is working as an undercover agent for the CIA, who is supposed to help the imprisoned government member Kamarov (Sebastian Koch) to escape, in order to get information through him, which is not only important for the future of Russia, but for the entire world peace. Father and son McClane must now bridge all their differences to get Kamarov to safety, which seems impossible due to his all-powerful enemies.

Twenty-five years after his first appearance as John McClane, Bruce Willis returns once again to arguably his most popular and successful role. But there's little left here with the McClane who fought Hans Gruber and his brutal henchmen in Nakatomi Plaza all by himself in the first installment, and didn't let that stop him from walking barefoot over broken glass. Even in the fourth installment of the series, which hit theaters six years ago, McClane was no longer the simple cop who was simply in the wrong place at the wrong time, but a sort of modern superhero who can defy all laws of gravity and logic. It's certainly quite entertaining, but it's a far cry from the original Die Hard flair.

In A Good Day to Die, the whole thing is now taken to an even greater extreme. While McClane's advancing age has made him a bit slower and lumbering overall, he survives serious car accidents or hard knocks from Russian gangsters almost unscathed. And even nuclear radiation doesn't harm our hero, there's a spray for that - no kidding - according to this movie. Director John Moore (Flight of the Phoenix, Max Payne) has a knack for good action sequences, which is evident throughout. However, he's really not much of a storyteller. His adaptation of the already fairly shallow script by Skip Woods (Hitman, The A-Team) is fun when it's really cracking, but otherwise bristles with clichés and moments of completely unnecessary boredom. The complicated father-son relationship is particularly bad, culminating in a cheesy emotional outburst and an even cornier final shot that simply has nothing whatsoever in common with the coolness of the earlier films.

Besides that, some of the actors also give almost unintentionally hilarious performances. While Bruce Willis is still a damn cool sock who is just fun to watch, Jai Courtney remains rather pale alongside him. But against what Rasha Bukvic delivers here as the head(?) villain, Courtney's performance is almost pure gold. Bukvic at times acts completely lackadaisical, at other times too over-the-top to exude even a moment of viciousness remotely comparable to his predecessors.

In the end, with all this criticism, the question really remains: does this make Die Hard - A Good Day to Die a really bad movie? No, as simple action entertainment it actually still works quite well. Especially in a time when many 80s action stars like Stallone, Schwarzenegger or van Damme have returned from retirement to the action business, Bruce Willis proves that he can easily put his colleagues in his pocket with his unbeatable style. But what John Moore has directed here is simply not a Die Hard movie. John McClane can still so often call his opponents a pig's ass. So if you expect a worthy successor to the first parts, you will be disappointed. Who just wants to see senseless action with a still really cool Bruce Willis and not bothered by a lack of logic and a little too many, in part, badly outdated clichés, will certainly be well entertained here.