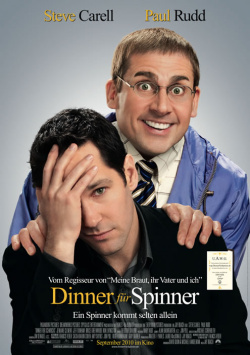 With "Le dîner de cons" (in Germany "Dinner for Spinners") comedy specialist Francis Veber achieved one of his (so far) last great successes in 1998. Not only as a film, but also as a play, the biting fun was able to win over critics and audience alike. Jay Roach, also specialized in comedy ("Austin Powers", "My bride, her father and I"), has now adopted the material and adapted it for the American market. The result has its moments, but is not as convincing as the French original.

The story is, at least in its core, the same: Tim (Paul Rudd) desperately tries to get ahead in his company. Not only does he want to give his girlfriend (Stephanie Stostak) a certain lifestyle, he also wants to prove to his boss Lance Fender (Bruce Greenwood) what he is made of. And in fact he gets a chance for it, which looks a bit different than Tim had imagined: he gets an invitation to a very special dinner at Mr. Fender's, to which every invited person should bring another guest who has very special talents. However, this is not intended to impress society, but to amuse it. Because it is true that the winner in the evening is the one who brings along the biggest crackpot. At first Tim is morally disgusted by this idea, but when the stupid Barry (Steve Carell), a tax clerk, runs in front of his car and it turns out that he is pursuing an extremely bizarre hobby, Tim sees his chance. But of course everything comes differently than he had planned...

The US version of "Dinner for Spinners" has a great comedy cast, especially in the supporting roles. Star ventriloquist Jeff Dunham, "Hangover"-star Zach Galifianakis or David Walliams, known from "Little Britain", make for some very good laughs with their short appearances. And yet the film can only convince to a limited extent. Because the gags always move on the very narrow line between hilarious and extreme foreign shame. And unfortunately the latter moments clearly predominate in the end.

In principle, Roach should be highly credited for not delivering a pure remake, but rather adding his own ideas to the well-known story. So there are subplots, which are either completely new, or at least in comparison to the original significantly expanded. It is good that at least attempts have been made here to be able to derive new aspects from the familiar. But unfortunately, this actually commendable circumstance is also one of the movie's biggest weaknesses. Because again and again Roach shoots with his production over and over again the goal, transforms good collecting mains into flat silliness or rides tidy gags to death.

No reproach can be made to the actors here. Steve Carell is the perfect "spinner", Paul Rudd is, as in his last roles, the likeable "Everyman" and Bruce Greenwood is as the director of the "Dinner for Spinners" simply great greasy. But also the great joy of the actors and some nice ideas (including the nicely designed opening and closing credits) can't prevent that Jay Roach's version of the French comedy can't produce enough real laughs to play in a league with the original. Therefore, if you like it a bit silly and like crazy US comedy, you might get your money's worth here. But if you are looking for the originality and charm of the original, you will surely be disappointed.