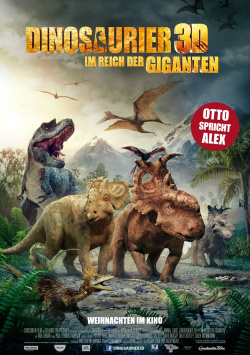 Dinosaurs 3D - In the Realm of the Giants

With the series Dinosaurs - In the Realm of the Giants, the BBC has created a stirring and educational documentary series thanks to a perfect mix of first-class CGI effects and fascinating nature shots, which is now to continue its triumphal procession in the cinema. For the big screen continuation, however, the makers have fundamentally changed the concept of the series. It is true that here too there is information conveyed in a way that is suitable for children. But primarily the young viewers should be served an exciting prehistoric adventure with talking dinos.

In the center of the story of Dinosaur 3D - In the Realm of the Giants is the little Pachyrhinosaurus Patchi (voiced by Patrick Roche), who has always been considered an outsider in his herd because of his size and lack of courage. His brother Bruto (Manuel Straube) in particular loves to raise Patchi wherever he can. But of course little Dino doesn't let it get him down that easily. He believes in himself, finds a loyal friend in the ravenous prehistoric bird Alex (Otto Waalkes) and then falls in love with the dino girl Juniper (Marie-Christin Morgenstern). But when Bruto becomes the new leader of the herd and his stubbornness puts the lives of Patchi, Juniper and the other pachyrhinosaurs in danger, Patchi has to put aside his reticence and finally show some real courage and leadership - but he may soon regret this decision.

No question, the blending of real-life backgrounds and animated prehistoric creatures works quite splendidly again here. Technically, this 3D visit to the realm of the giants is just about perfect. The dinosaurs look great and in most moments downright lifelike. In principle, the idea is also to present the whole thing a bit more child-friendly, to bring young dino fans closer to the world of prehistoric giants. But when after a few minutes unimaginative fecal jokes are used to achieve quick laughs, a bad feeling spreads quickly, which is unfortunately confirmed more and more in the course of the film.

Because while the film at the beginning - apart from a completely unnecessary frame story set in the present - at least makes an effort to be not only entertaining but also informative, the makers later rely only on almost completely humanized characters, an unoriginal love story and a hackneyed message about courage and friendship. The animals do talk to each other, but without moving their mouths, which also seems a bit odd. So the whole thing leaves a very indecisive overall picture: it's not a real educational film, but it's not pure talking animal animation fun either. On the one hand, it's aimed at a very young audience, but on the other hand, the dino fights are implemented quite brutally. When a bad dino gets his arms broken, it's not necessarily recommended for very young moviegoers.

However, these criticisms will probably only be noticed by older dino fans, who will enjoy the top-notch animation but won't be too thrilled by the childish gags - the sayings of bird Alex aka Otto Waalkes included. Children, however, are guaranteed to love the film, as their expectations are simply quite different from those of adult viewers. But even if the film is a lot of fun for younger dinosaur fanatics, it would have been nice if the makers had also given children a little more attention and interest in information transfer in the way it was practiced in the series. You don't necessarily have to dumb down such material to entertain children well. Therefore: Visually top, contentwise rather flop, but for dino fans between 6 and 11 years nevertheless absolutely worth seeing!