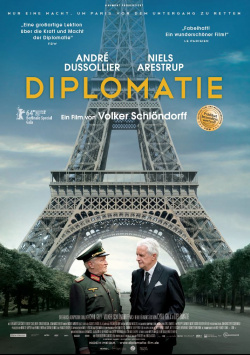 It is the night of August 24-25, 1944: Allied troops are at the gates of Nazi-occupied Paris. Adolf Hitler's orders are clear: there is only one clear victory or an all-destroying defeat. Either Paris remains in the hands of the German troops or it is completely razed to the ground. All preparations for this are made and all important places - the bridges over the Seine, the cathedral Notre-Dame, the Louvre or even the Eifel Tower - are mined. General Dietrich von Choltitz (Niels Arestrup) is supposed to make sure that Hitler's order is carried out. But the Allies are desperate to prevent the city from being destroyed and many innocent people from losing their lives. The Swedish Consul General of Paris Raoul Nordling (Andr&eacute; Dussollier) is supposed to help stop von Choltitz from following his orders. But can one man alone really manage to prevent destruction of unimagined proportions?

With his film adaptation of the play Diplomacy by Cyril G&eacute;ly, Volker Schlöndorff (The Tin Drum) has created a small masterpiece. Primarily driven by dialogue, the drama rarely leaves General von Choltitz's headquarters at the Hotel Meurice in Paris. Moreover, for much of the running time, the action is dominated solely by two characters. The result is a stylistically intimate chamber play of immense dramaturgical grandeur. The brief glimpses that von Choltitz and Nordling cast of Paris and the few scenes that take place outside the hotel give an idea of what is at stake that night. But it is the intense duel of nerves between the two main characters that turns Diplomacy into a highly suspenseful psychological thriller, which has become quite great cinema precisely because of its small-scale mise-en-scène.

Even though this nightly confrontation between the two real-life characters didn't really happen and the story is primarily fiction despite some proven facts, that doesn't really change the impact and especially the importance of the film. Because even though the story is set at the end of World War II, Diplomacy is extremely topical stuff that impressively shows how important direct dialogue is for resolving conflicts and how crucial it is to choose the right words and engage with your counterpart. This becomes so clear in the film because its very great strength is its dialogues. The script by Schlöndorff and G&eacute;ly is intelligently written and, in addition to the many very serious and moving sequences of long conversation, also has some surprisingly witty moments that allow the viewer a few small laughs to break the tension.

There are many dramas that confine themselves to a single plot location, leaving the impression that they are better off on television than on the big screen. Now, one might think that this is also the case with Diplomacy, especially since the film was made in collaboration with various German and French broadcasters anyway. But the chamber play doesn't seem out of place in the cinema for a moment. The mix of captivating staging, engaging camerawork and detailed set design, combined with the story, easily elevates the film above the level of a television drama and therefore justifies the price of a movie ticket. Anyone who appreciates sophisticated acting and likes political thrillers in which the fight is not with weapons but with words should not miss this outstanding film. Absolutely worth seeing!