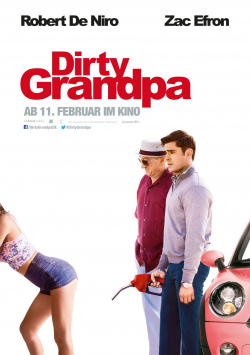 Young lawyer Jason (Zac Efron) is about to marry the controlling Meredith (Julianne Hough). This would not only secure him a partnership in his future father-in-law's prestigious law firm, but perhaps finally the respect of his father David (Dermot Mulroney). But in the midst of stressful wedding preparations, Jason is asked to drive his grandfather Dick (Robert De Niro) to Daytona. Convinced he's doing Dick, who just lost his wife, a favor, Jason reluctantly agrees to the trip. But the widower doesn't want to forget his grief while playing golf. No, he wants to have a blast on spring break and finally get laid again. And along the way, he wants to keep his grandson from making the biggest mistake of his life. So begins a wild road trip that threatens to end in disaster for Jason.

Before making his feature film debut as a director with the comedy This Won't Last a Year, Brit Dan Mazer has written screenplays for The Ali G. Show and the films Borat and Brüno, among others. So irreverent and often raunchy humour below the belt is not new territory for Mazer. But as crude as his gags were in these works, they were also always accompanied by a certain satirical cleverness, which is how Sacha Baron Cohen's art characters have achieved such a high cult status. Now, with his latest directorial effort, Dirty Grandpa, Mazer is once again moving into the lower humor regions. But this time any sign of cleverness and charm is missing, so that in the end only one long penis joke is left.

It may be quite amusing at the beginning to see a renowned star like the two-time Oscar winner Robert De Niro as a permanently horny grandpa who wants to show his stuffy grandson how to enjoy life properly. But after ten minutes at the latest, the incessant jokes are simply tiresome and embarrassing. Mazer skilfully avoids every opportunity he gets to let the humour play out above the belt. The script also seems to have edited out every word that isn't a synonym for penis or intercourse. There are scenes where this works and is quite funny. But for a film that's almost 100 minutes long, it's just far too little. It gets really embarrassing, however, when there is an attempt to convey something like a moral towards the end. When Dick and David finally speak out after many years of silence, it makes for a mild nausea amidst the very vulgar setting. It's really really bad.

Dirty Grandpa is - at the risk of sounding like it now - not an absolute disaster. There are some thoroughly successful aspects, such as a dealer's very special relationship with the local police. It's so delightfully silly that it's funny again. But overall, Dan Mazer has let most of the opportunities for a funny, clever multi-generational comedy go to waste in favor of extremely flat and unfunny sex jokes of the lowest order. And given the actual talent in front of and behind the camera, that's a real, real shame. Therefore, in the end, there is also only with clear reservations a hesitant: Conditionally worth seeing!