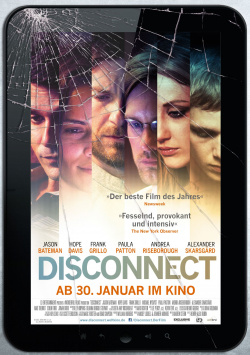 Is global networking through the internet a curse or a blessing? How dangerous are social networks? Do they promote real contacts or do they rather lead to a general isolation? Award-winning documentary filmmaker Henry-Alex Rubin deals with these and other very complex questions about the Internet in his first feature film Disconnect. The film tells the story of the family of Rich (Jason Bateman), a lawyer who is so caught up in his job that he has lost any form of normal communication with his wife (Hope Davis) and their children Ben (Jonah Bobo) and Abby (Haley Ramm). So he also doesn't notice that Ben is constantly bullied by his classmates. Especially Jason (Colin Ford), son of an ex-cop (Frank Grillo) has it in for the loner. Together with a buddy he comes up with a cruel idea, which is supposed to be just a little prank, but which will have fatal consequences.

Really happy are also Derek (Alexander Sk&aring;rsgard) and Cindy (Paula Patton) since the death of their child. While Derek closes himself off completely and takes refuge in online poker games, Cindy seeks support for her grief in online support groups. When they fall victim to credit card scammers and slide toward financial ruin as a result, the estranged couple decides to take justice into their own hands together. TV journalist Nina Dunham (Andrea Riseborough) also wants to stand up for the right when she meets young Kyle (Max Thieriot) in a porn chat room, where he works as a stripper in front of his webcam. For Nina, it's just a good story at first. As she gets to know Kyle better, she is determined to help him lead a better life - but her career ambitions keep getting in the way.

Like so much else on the Internet, these individual fates are more closely intertwined than they first appear. Rubin skilfully weaves the individual storylines into a stirring whole that very slowly but inexorably moves towards its dramatic climax. With an excellent ensemble of actors, the spherical music of Max Richter and a very cleverly constructed screenplay, the director manages to build a charged atmosphere, through which the very quiet staging in spite of a consistently high tension is established. It's stirring, infuriating and also a little scary. And even if a little too much sentimentality comes into play in the final moments, as a viewer you leave the cinema very moved and certain that you have seen not only a very good film, but also a significant one.

Because although in Disconnect, as in many other films that are told episodically, the use of different storylines comes at the expense of the narrative depth of the individual stories, the overall construct never feels superficial. And measured against the film's very timely and important subject matter, that's hugely important. Superficiality would have been enormously annoying here. But Rubin avoids this cliff with absolute aplomb, which is why his film is able to live up to its high ambitions in the end. Sure, the production has to struggle with a few minor lengths and isn't completely free of old familiar clichés either. But since the drama deals with issues that can also affect each and every viewer, one is so captivated by the networked events that such minor weak points hardly stand out in a negative way.

Disconnect does an excellent job of showing what far-reaching consequences carelessness on the Internet can have, how important it is not only to enjoy the benefits of the virtual world, but also to be aware of its dangers. When you see how easily existences can be destroyed and unstable souls tormented, it seems extremely depressing, especially with the awareness that this is an unfortunately everyday reality. It's a feeling that doesn't let go of you as a viewer anytime soon. As a result, the film makes you think and discuss things, while still providing exciting and engaging entertainment. If you like slightly more sophisticated ensemble dramas, this is one you shouldn't miss. Absolutely worth seeing

Cinema trailer for the movie "Disconnect (USA 2012)"
Loading the player ...