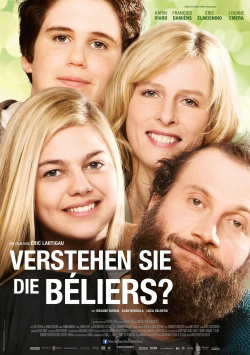 Do you understand the Béliers?

Paula B&eacute;lier (Louane Emera) thinks she has a normal teenage life. Her parents Gigi (Karin Viard) and Rodolphe (Fran&ccedil;ois Damiens) often just embarrass her and her little brother Quentin (Luca Gelberg) annoys her with beautiful regularity. But it's not all so normal, because she's the only one in the family who isn't deaf. And it's up to her to negotiate prices with the suppliers for the family farm or to serve the customers at the cheese sale at the weekly market. When her father, annoyed by the incompetence of the incumbent mayor, sets his mind on becoming his successor, Paula also has to organise his election campaign. Of course, it's inconvenient that her music teacher (Eric Elmosnino) is so enthusiastic about her singing voice that he suggests she study singing in Paris. But Paula can't possibly leave her family alone.Can she?

Understand the B&eacute;liers? was a bona fide box office hit in France. In the first 20 days alone, the comedy attracted over 3 million viewers to the cinemas and successfully stayed in the top 10 of the cinema charts for over two months. The reason for the success is quickly found. Because despite a few small lengths and a few over-the-top gags, this very special family story is simply a light-hearted feel-good movie that not only makes its audience laugh, but also hits right to the heart with its music and some very beautiful moments. The actors make sure that the B&eacute;liers family is extremely likeable right from the start. Above all, it's the very uninhibited way they deal with their disability, which is actually only perceived as such by those around them, that makes them so endearing - even if in some scenes you can definitely understand why Paula is sometimes really embarrassed by her parents.

A real surprise is Louane Emera, a participant in the French version of the casting show The Voice, who is not only convincing vocally. Her acting may not be award-worthy, but it comes across as refreshingly uninhibited and very authentic. But also Karin Viard and Fran&ccedil;ois Damiens, between whom the chemistry is just perfect, as well as Eric Elmosnino leave a very positive impression. Another major role is played by the music of French singer Michel Sardou. Some of his most beautiful songs made it into the movie in different versions and also play a very central role. Especially when Paula sings the ballad Je vole for her parents in sign language, it's a real goosebump moment that can bring a tear to your eye.

In the middle part the story seems to go round in circles and the humour doesn't always work. Moreover, it can't be denied that the really big surprises are missing and the script always moves on all too familiar terrain. And yet, the family comedy works really well overall. Director Eric Lartigau has directed a charming film about love, passion and the necessity to let go sometimes. It might not be very profound, but it's entertaining and nice. If you like light French entertainment with a lot of wit and charm, you should definitely pay a visit to the B&eacute;liers family. Worth seeing!

Cinema trailer for the movie "Do you understand the Béliers? (Frankreich 2014)"
Loading the player ...