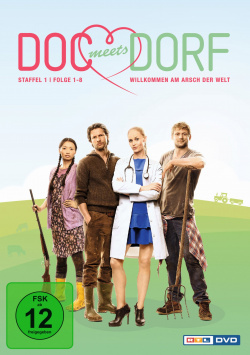 Content: Holy fucking shit! That's what Fritzi Frühling (Inez Bjørg David), aspiring heart surgeon from Frankfurt, thinks when she arrives in the small Brandenburg village of Canada, from which she fled after the accidental death of her mother several years ago. Now, after the death of her aunt, she must face her past, having inherited her aunt's old farm. This couldn't come at a worse time, as Fritzi's nerves are on edge anyway. After finding out that her boyfriend is marrying someone else and losing her job after a memorable freak-out, she really doesn't need a reunion with people like her ex-boyfriend, veterinarian Falk (Bert Tischendorf). And that's not all: suddenly Fritzi is also supposed to take over the job as village doctor and share a practice with Falk, of all people. In addition, there is the attractive neighbor Kai (Steve Windolf), who confuses her emotional world, the beastly Nene (Linda Chang), who lives on her aunt's farm and is not very enthusiastic about the newcomer, the somewhat incompetent receptionist Ellen (Nikola Kastner) or the shy policeman Till (Matthias Bollwerk), who would love to conquer Ellen's heart - all people who get on Fritzi's nerves at first. But after successfully navigating the initial medical disasters that befall Canada, she finds that she does grow quite fond of the village and its inhabitants - and one in particular. Or is it the other one after all?

Doc meets village makes use of a not exactly new initial idea. Whether it's Doc Hollywood or Alaska of all places, the motif of the big city dweller who finds himself in a rather quirky village community has been done in a humorous way several times in the past. So it should quickly become clear that Doc meets Dorf doesn't offer any very big surprises. Author Miriam Rechel and director Franziska Meyer Price vary the well-known basic idea only by throwing a little Grey's Anatomy into the mixer through the rather unusual cases with which Fritzi is confronted and through her voice-over comments. Also the mixture of romance, comedy and drama remind again and again of the US success series.

But even if the smaller and larger role models are very clearly recognizable, the series understands it nevertheless quite well to develop something like an own character in only eight episodes. This is especially due to lead actress Inez Bjørg David, who on the one hand convinces in the romantic and dramatic scenes, but who is also not too shy for a bit sillier scenes and reveals real comedic talent there. Even if not all of her co-stars are equally convincing, the makers have gathered a very likeable and well harmonizing ensemble in front of the camera, which drives the entertainment value of the series in pleasant heights.

Unfortunately, the mixture of comedy and drama does not always work. Only a few episodes are clearly designed in one direction, like the extremely humorous pilot episode or the actually very sad and dramatic episode The Day the World Stopped. In the other episodes, funny moments regularly alternate with more serious scenes. And that doesn't always seem coherent, because especially the humor sometimes overshoots the mark a bit. Especially towards the end of the season, the events become more and more abstruse and exaggerated, culminating in a finale, whose last minutes unfortunately want too much and are therefore completely unsuccessful. It remains to hope that the series is granted a second season and the makers can then make up for this slip and lead the whole thing back into something more orderly.

Doc meets Dorf is an amusing series with a lot of potential, which is buried in some moments but under too overwrought humor and too contrived stories. But the many nice ideas, the successful plot lines and the likeable actors make the eight episodes absolutely worth watching and let us hope for a sequel soon!

Picture + Sound: Since only a data-reduced press sample was available for testing, no rating can be given here about the final picture and sound quality.

Extras: Also the bonus material could not be sighted on the press disc. Deleted scenes, an audio commentary, interviews and outtakes have been announced for the purchase variant.

Conclusion: Doc meets Dorf is an entertaining mix of comedy, drama and romance that lives primarily on the charm of lead actress Inez Bjørg David and the endearingly quirky supporting characters. The mixture doesn't always want to work, as especially the humor overshoots the mark here and there. But despite some weaknesses and an unfortunately unsuccessful cliffhanger at the end of the season, the eight episodes offer very good, often funny and charming entertainment, which may be continued for a few more years. Recommendable