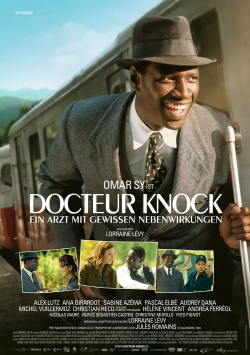 Docteur Knock - A Doctor with Certain Side Effects

By a crazy coincidence, small-time crook Knock (Omar Sy) becomes a respected doctor. As such, he takes a job in the sleepy little town of Saint-Mathieu, where he would actually have very little to do as a doctor. For the inhabitants of the small town enjoy the best of health. But with his special charm and irresistible powers of persuasion, Docteur Knock manages to convince his new patients that they are plagued by one ailment or another. And so he and the local pharmacy are soon ringing up the cash registers. But then his foolproof plan falters when he falls in love with young Ad&egrave;le (Ana Girardot) and he develops something of a conscience. Then, when a dark shadow from his past appears in Saint-Mathieu, his new prosperity and idyllic life may be over for good.

Since Pretty Best Friends, Omar Sy has been French cinema's all-time great likable character. But even though his charm is omnipresent in Docteur Knock as well, he has a hard time really charming his audience here. This may be due to Lorraine Levy's richly indecisive staging. This is the fourth time the story of Dr. Knock, which premiered as a play in 1923, has been adapted for the cinema. Levy has moved the plot of what should have been a fairly dark play to the 1950s and, enriched with humour and romance, wanted to make it a genuinely feel-good film.

But unfortunately she hasn't succeeded. Sure, there are some quite amusing scenes. And Saint-Mathieu actually comes across as something you can feel good about. But the film just doesn't want to succeed in finding a coherent tone. The production meanders back and forth between slapstick, farce, satire, drama and romance. The biggest problem with this is that the film is neither really funny, nor is the story told in such an exciting or emotionally involving way that one is happy to forgive it for such weaknesses.

So in all this indecision, Docteur Knock suffers probably the worst fate that can befall a film: It doesn't get really bad, but it gets petty and extremely boring. At the beginning, the viewer is quite interested in how the crook becomes a doctor and how he gets hold of the money of the so healthy citizens of the idyllic village in the south of France. But it soon becomes clear that neither the comedic timing is right, nor the elaboration of the story really works.

After almost two very long hours, only disappointment remains at the end - disappointment about the wasted talent of Omar Sy, but also disappointment about having invested time and money for a film that you might just about give a chance on TV, but which you really don't need to have seen in the cinema. And that's why it's only worth seeing for die-hard fans of Omar Sy. Otherwise better save the money and invest in one of the many better films that are currently in theaters.

Cinema trailer for the movie "Docteur Knock - A Doctor with Certain Side Effects (Frankreich 2017)"
Loading the player ...