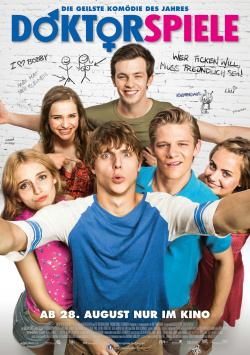 Puberty is an Asshole! However, the ever-rising testosterone levels can also make a boy's life a living hell. This experience also suffers the shy Andi (Merlin Rose), who is head over heels in love with his beautiful classmate Katja (Ella-Maria Gollmer). But Katja only has eyes for the well-endowed Bobby (Jannis Niewöhner). And Andi just can't keep up. At the latest since an extremely formative disgrace at Doktorspiel with his sandbox girlfriend Lilli (Lisa Vicari) ten years ago, he is sure that he has too little to offer down below. And from the movies his best buddy Harry (Max von der Groeben) shows him, he knows that size does matter. To make matters worse, Lilli, who moved away years ago, reappears for a short visit, throwing Andi into a fair amount of emotional chaos, which reaches its climax when Katja suddenly seems interested in him.

Quite clearly, like the book, the film is aimed at a teenage audience. Viewers over 18 will have a hard time laughing heartily at the hormone-induced confusion of this comedy. But those who have just fallen in love for the first time, who have made a fool of themselves in front of everyone at a party, or who just find their parents embarrassing at the moment, will probably rediscover a lot in Doktorspiele, which at least in the cinema will give them a good laugh. Certainly, the whole thing is not really demanding and some gags seem too effortfully raunchy, so that it could really ignite. But the target audience should not be bothered by the rather flat dialogues and the pubescent jokes.

Despite this, the feeling remains in the end that the very playful young actors would have deserved a better script, to be able to play their talent to the fullest. However, they only rarely get the chance to do so. Especially in the first half of the movie the script tries too hard to get laughs with as many jokes and embarrassing situations as possible, so that the actual development of the story and the characters gets lost. The whole thing improves in the second half, but the quality of School is really only very rarely reached. The young actors as well as their more experienced co-stars like Oliver Korritke or Christiane Paul act sympathetic enough to make up for it. Still, the film would have definitely benefited from a book that didn't just focus on gags below the belt, because in and of itself, the story is really nice.

What can't be denied about the film, on the other hand, is that it looks really good. The images captured by cinematographer Jo Heim of the filming locations in Frankfurt and the surrounding area make not only the actors but also the Main metropolis look really good, and the editing adds extra pace to the story. All of this doesn't make Doktorspiele a really good movie, but at least one where there's nothing to complain about from a purely technical point of view. If good-humored actors, a very successful visual realization and a decent pace are enough for you and if you don't mind that the dialogues are primarily about all kinds of sex, you will definitely have a lot of fun with this German teen comedy. But for those who expected a little more depth and hoped for some more original gags, this cinematic dick comparison could quickly become boring. Therefore: only for lovers of coarser comedy fare between 14 and 17 years definitely worth seeing!

Impressions from the premiere in Frankfurt can be found HERE